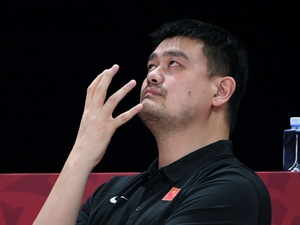 Chinese basketball chief Yao Ming is "extremely hot" over the controversy sparked by a Houston Rockets executive's pro-democracy tweet, NBA Commissioner Adam Silver said Tuesday, adding that he hoped to work with him to cool the escalating dispute.

Morey's comments have infuriated Chinese fans and caused broadcasters and sponsors to abandon the NBA, while the Chinese Basketball Association (CBA) -- headed by Yao -- has severed relations with the Rockets, who played center for the team for eight years.

Speaking at a press conference in Japan, where the Rockets are playing exhibition games this week, Silver said variously that Yao was "extremely upset", "extremely unsettled" and "extremely hot".

"I am hoping that together, Yao Ming and I can find an accommodation," said Silver, who visits Yao's hometown of Shanghai on Wednesday for two pre-season exhibition games.

pitting the Los Angeles Lakers against the Brooklyn Nets.

"But he is extremely hot at the moment and I understand it."

Yao, who is yet to comment publicly on the controversy, enjoys a stature in China matching his massive 7-foot 5-inch (2.28 metre) height.

The NBA Hall of Famer and former All-Star is by far his country's greatest player, and was a major factor in helping the NBA build up its fanbase in China, where Yao's eight-year career with the Rockets was closely followed.

Although the two league bosses would be expected to meet as the NBA stages its annual China pre-season exhibition games, Silver did not explicitly confirm that a meeting would take place.

But Silver said the NBA had "communicated directly" with Yao over the controversy.

"I am not sure he quite accepts how we are operating our business right now, and I accept that we have a difference of opinion," said Silver, who reiterated that the NBA would uphold the right of its personnel to express their opinions and would not apologize for Morey.

"I don't come here to tell others how to run their governments," Silver added.

"But at the end of the day I am an American and there are these values that are deeply rooted in the DNA of the NBA, and that includes freedom of expression for our employees."