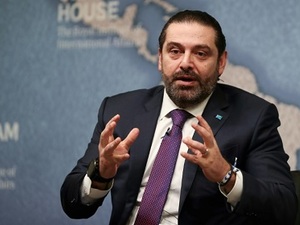 Prime Minister Saad Hariri on Tuesday announced that “the Emiratis have promised to make investments and offer Lebanon financial aid.”

“Efforts are underway to fulfill the promise,” Hariri told reporters as he wrapped up an official visit to the UAE.

“We are negotiating with them over the investments that they wish to make in the various sectors, in addition to financial investments in some banks or the central bank,” Hariri added.

“Today we have to follow up on the positive results of this visit and all capabilities are on the table,” the PM went on to say.

And calling for focusing on “what is the best investment that the UAE can make in Lebanon,” Hariri revealed that a Lebanese-Emirati “follow-up cell” has been formed to address all the topics that were tackled in his meeting with Abu Dhabi Crown Prince Sheikh Mohammed bin Zayed and in the second edition of the Lebanon-UAE Investment Forum.

Did you, Saad, promise to fix our economy 10 years ago? Well how come that the situation is worse than ever ?