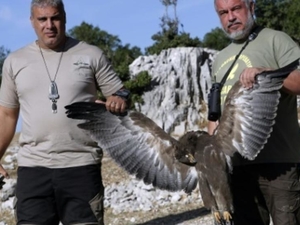 Bird protection groups called Tuesday for urgent action to save endangered migratory species that are being decimated by illegal hunters over Lebanon.

For the 41 species in Lebanon listed as particularly endangered, "the situation is really critical," said Fouad Itani, president of the Association for Bird Conservation in Lebanon.

"If nothing is done, their numbers will continue to drop and some species will simply disappear," he told AFP.

According to official figures, 2.6 million birds from close to 200 species were killed illegally in the country in 2014. Itani believes the numbers killed have risen since then.

Lebanon lies on one of the world's most important migration routes and for many species -- such as storks, lesser spotted eagles and pelicans -- the most dangerous part of their journey is flying over the small Mediterranean country.

"Hundreds of thousands of white storks are killed in Lebanon every year," Itani said.

Bird protection groups have successfully raised awareness in some regions but the situation in the north remains "out of control," according to a joint statement by the Association for Bird Conservation in Lebanon and the Committee Against Bird Slaughter, based in Germany.

The statement was released after a field visit organized for Lebanese and foreign officials Tuesday.

Itani said poachers in the north "are shooting for fun, big numbers. They shoot even at night, using spotlights... They have WhatsApp groups to track the birds together."

Countries such as Poland and others along migratory routes have pressured Lebanon to take action.

Killing of birds has been reduced in some areas this year through the awareness campaigns and in cooperation with authorities, the statement said, but improved bird protection laws have yet to be enforced by the security forces.

The joint statement called for the creation of a professional and dedicated wildlife crime unit to curb poaching during migration periods.

The average Lebanese Shia is on the picture. There’s lots of educational work to be done in order to fix the broken country.

sad... one Day education should catch up with us.