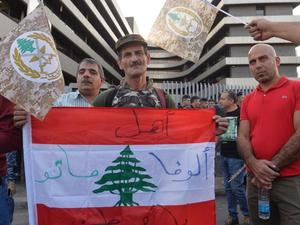 The protesters blocked the entrances to the building amid tight security measures.

Retired Brig. Gen. George Nader told LBCI TV station outside the Value-Added Tax building: “Today's sit-in is only a warning to shed the light on the rights of retired military servicemen,” he said, warning of “escalatory” measures if their demands are not met.

Retired Brig. Gen. Andreh Abu Maashar said: “We will not block any roads with burning tires today, because the whole Lebanese are suffering like the veterans are. The authority's performance is unacceptable.”

The veterans held a series of protests earlier against deductions to their pensions in the 2019 state budget which introduced austerity measures and increased income and import taxes and suspended early retirement schemes for three years.

Army veterans say the measures cut deep into their pensions and benefits.

Braves you say? kindly remind us of the battle they fought and won?
Lets not get ahead of ourselves here although our soldiers deserve respect no one is above the law. Except Kizb of course they are way above the law....