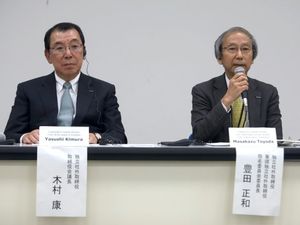 Nissan's new chief executive Makoto Uchida is an insider with a global outlook, but he faces an uphill struggle to right the Japanese automaker still reeling from the Carlos Ghosn scandal.

Uchida, 53, was named on Tuesday to replace Hiroto Saikawa, who resigned in September after being implicated in an excess pay scheme.

He will be joined in the top ranks by newly named chief operating officer India-born Ashwani Gupta, who currently serves in the same role at Nissan partner Mitsubishi Motors.

And Nissan's Jun Seki, current head of the firm's China unit, will serve as vice-COO, in a new structure intended to avoid anyone consolidating power in the way Ghosn is said to have before his arrest on financial misconduct charges last year.

Uchida is described as a skilled administrator with international experience and a commitment to Nissan's tense alliance with France's Renault and Mitsubishi Motors.

He "made a strong impression on me", Renault chairman and Nissan board member Jean-Dominique Senard told AFP.

"He is very Japanese, but he has an openness from his international background," added Senard, who sat on the nomination committee that carried out the CEO search.

He described Uchida as "direct" and with a "very modern" management style.

Importantly for Renault, which has pushed for a strengthening of its three-way partnership with Nissan and Mitsubishi Motors, Uchida views the alliance "as essential for the future of Nissan", Senard said.

Uchida began his career at trading house Nissho Iwai and in 2003 joined Nissan, where he is currently serving as a vice president.

He has an unusually international background for a senior Japanese executive, having spent much of his childhood overseas including in Malaysia, and reportedly speaks near-native English.

He is even reported to have conducted negotiations in Tagalog with traders in the Philippines while working at Nissho Iwai.

"Uchida is what Japanese call a kokusai-jin" (citizen of the world): he's very international and has spoken English since he was child," said Janet Lewis, an auto analyst at Macquarie Capital Securities.

He holds an undergraduate degree in theology and has worked heading Nissan's joint venture in China as well as at Renault Samsung in South Korea.

Nissan executives stressed that unique profile in naming Uchida on Tuesday, saying he had a "diverse and wide range of experience".

"We are in a difficult time (and) he will be qualified as the leader of the company," said Masakazu Toyoda, who headed the nomination committee.

Gupta too is seen as a relatively forward-thinking choice for the COO role, as a non-Japanese executive who at 49 is significantly younger than many in the upper echelons of Japan Inc.

He is said to be a keen supporter of the alliance with Renault, and obtained a diploma from French business school Insead.

Seki, meanwhile, is viewed as a Japanese insider. He has spent his entire career at Nissan, and graduated from Japan's National Defense Academy, usually a track into the military.

Nissan has been undergoing a governance overhaul in the wake of the Ghosn scandal, which saw the tycoon accused of under-reporting compensation and using company funds for personal expenses.

The decision to name a new COO and vice-COO is intended to create a more open executive structure, experts said.

"The troika system was introduced to avoid the emergence of dictatorship," said Koji Endo, a senior analyst at SBI Securities.

But he warned that the decision could come with downsides.

"The troika management system may have some weakness when it comes to quick decision-making compared with a system led by a strong leader."

And the team faces enormous challenges. In July the firm posted its worst first-quarter results since the global financial crisis and, while it has cited a global slowdown in the auto sector, Nissan is also suffering from a lack of innovation and reputational damage from the Ghosn scandal.

"The very first thing the new CEO has to do is to revise down Nisan's full-year earnings forecast... and then cut dividends," Endo said.

The alliance must also be strengthened, 12,500 job cuts implemented, and the US business turned around, he added.

"It is a task that normally takes more than a year or two but it has to be fixed quickly."