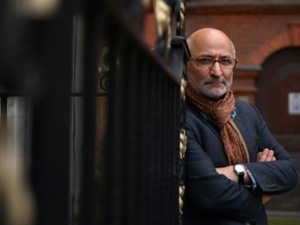 Filmmaker Taghi Amirani calls them the documents that changed the fate of his country, casting light on Britain's role in organising the overthrow of Iran's leader six decades ago.

His film, "Coup 53", screened at the London Film Festival last weekend, purports to find fresh evidence that a British spy spearheaded the ousting of popular prime minister Mohammad Mossadegh in 1953.

With the help of the CIA, the covert operation led to the removal of Mossadegh, who had riled London by moving to nationalise the UK-controlled oil industry.

The United States effectively conceded playing a role when in 2013 it released some CIA archives showing its involvement, but Britain has never admitted its part in the plot.

Amirani, an Iranian physicist turned award-winning filmmaker who has been based in London for 45 years, said finding proof that an agent from Britain's MI6 intelligence agency coordinated the coup was "a monumental lightbulb moment".

"It will in a way confirm everything Iranians have been saying for decades about the Brits," he told AFP in an interview at the festival, where his film is competing for a best documentary prize.

"The Brits are famously known in Iran as 'the old fox'... there's huge distrust."

Amirani said 1953's events were "more relevant than ever" and help explain the current heightened tensions between Iran and Britain and the US.

"No one can claim to really understand the dynamics and the volatile relationship... well unless they know what happened in '53," he added.

"It casts a lot of light on this."

- 'A lightning bolt' - Appointed prime minister in 1952, Mossadegh quickly became a hugely popular leader inside Iran but irked the British by moving to take over the Anglo-Iranian Oil Company, the predecessor of modern-day BP.

He had also angered the shah, Mohammad Reza Pahlavi, by trying to limit his powers and the king left the country later that year in protest.

In August 1953, a military coup saw Mossadegh arrested and then jailed for three years, before being placed under house arrest. He died in 1967.

The shah returned immediately after the ousting to rule Iran for nearly three decades, before he was then overthrown in the 1979 Islamic revolution.

"Like all counter-intelligence stuff there's a lot of smoke drifting over the tracks of who did what when," said Murch, whose credits include "Apocalypse Now" and "The Godfather" movies.

"But the film really does throw a lightning bolt across that landscape that makes it very clear what was going on."

The pair stumbled upon a 1980s British TV documentary which had identified and interviewed a former MI6 operative named Norman Darbyshire, who admitted helping mastermind the coup.

The now-deceased Darbyshire is conspicuously absent from the programme that aired, with suggestions the British government may have intervened to have him omitted.

Amirani discovered a transcript of his interview with the documentary makers, and enlists Oscar-nominated actor Ralph Fiennes to play the ex-spy in a re-enacted interview.

"The actual running of the coup from our side was my responsibility," Fiennes recounts Darbyshire saying.

Britain's Foreign Office did not respond to a request for comment.

For Amirani, 59, making a film about Mossadegh's overthrow felt "as personal as it can get".

"As a kid I lived through the consequences of the coup that gave rise to the shah's rule for 25 years," he said.

His interest was piqued after seeing pictures of the long-deposed prime minister at pro-democracy protests in Iran in 2009.

That resonated with a deeply-held sense that the country's recent history could have been radically different had Mossadegh remained in power.

"He, for many including myself, presented the hopes and dreams of a democratic secular Iran," Amirani said.

During his decade-long quest to make "Coup 53", relations between Iran and the West deteriorated markedly, with a 2015 nuclear deal unravelling and rising military frictions in the region.

Tensions between Tehran and London also increased due to the detention of several British-Iranian dual nationals and, more recently, the seizure of oil tankers by both sides.

Amirani said he could feel history repeating itself.

"Everything that happened in '53 was unfolding in the news headlines during our editing," said Amirani.

"The relevance of this film grew more and more the longer we spent making (it)," he added.

"What the film can tell us is what (former US President) Harry Truman said: 'there is nothing new in the world except the history you do not know'," Amirani recounted.