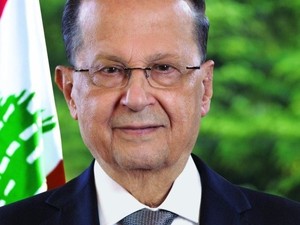 President Michel Aoun on Wednesday said that appearing before the judiciary is “a duty, not a choice,” after two ministers refused to meet with the financial prosecutor over suspected corruption at the Ministry of Telecommunications.

“Respecting the judiciary is a duty, not a choice, and summoning someone to it is not necessarily an accusation,” Aoun tweeted.

“Appearing before it certainly contributes to unveiling the truth,” he added.

Telecommunications Minister Mohammed Choucair had announced Friday that he will not meet with Financial Prosecutor Ali Ibrahim for a testimony over suspected wrongdoing in the telecom sector.

“I will not appear at the office of the financial prosecutor, neither for coffee nor for tea, and if he wants to meet I’m ready to host him at my house or office,” Choucair told reporters.

“Let them interrogate all telecom ministers who served between 1992 and today,” he added, lamenting that the file has been “politicized.”

“Let no one try to outsmart or intimidate us,” he said.

“Neither I nor Minister Jamal al-Jarrah will attend, and if he wants to come he is welcome,” Choucair went on to say.

Can someone tell us when mr Aoun’s trial for desertion is taking place ? Oh wait second SOS, the prosecutors are in his pocket so he’s got a choice.

Honestly, I’m anything by a violent person, but this Aoun deserves the worst.

Will he appear in front of the judiciary and explain how millions of dollars disappeared from the Central Bank just before he fled to France?