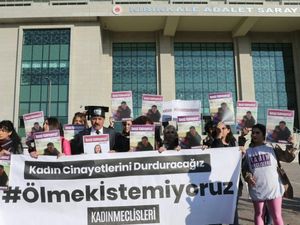 An emotional trial opened in Turkey on Wednesday over the murder of a woman stabbed to death by her ex-husband, with claims she sought police protection in vain.

The killing of 38-year-old Emine Bulut in August sparked outrage across Turkey after a video went viral of the moments after she was stabbed in front of her 10-year-old daughter.

The case reignited debate over mounting violence against women in Turkey, where more than 350 women have been killed this year.

Around a dozen women's rights activists gathered outside the courthouse, holding a large banner reading "we don't want to die".

Bulut, who had divorced her husband four years earlier, was stabbed in a cafe in the central Anatolian city of Kirikkale. She later died in hospital.

A video of the aftermath of the attack was posted online showing Bulut drenched in blood, screaming to her daughter: "I don't want to die."

He told police Bulut had insulted him.

He appeared in court in Kirikkale, near Ankara, but refused to testify, using his right to reman silent.

Varan's lawyer told the court that Bulut went to a police station to make a complaint against him a couple of hours before she was killed, saying it could amount to negligence on the part of the police.

Bulut's daughter testified via video link, confirming that she and her mother had gone to the police station before they were found by Varan.

When the judge asked her if she tried to stop her father, she said: "I threw my bag, I threw my tablet, but I couldn't stop him."

In words that left many people in the courtroom in tears, the child added: "He is that person... He is not my father."

Bulut's mother Fadime tearfully said she wanted Varan to "get the harshest sentence".

"How can he say he is the father when he has done what he has done?" she said, before breaking down.

As the court played the video clip, the hearing descended into chaos with members of Bulut's family attacking the defendant, forcing police to evacuate the courtroom.

The trial was later adjourned to October 21.

Experts say the violence is partly the result of women exercising greater freedoms -- not always welcome in conservative sections of Turkish society.

Divorcing or launching criminal complaints against violent partners can also lead to assault and murder in a society where many men still do not see woman as equal.

Activists have criticized the reduced sentences given in some cases when defendants claimed they were "provoked".

Turkey has ratified the Council of Europe's 2011 Istanbul Convention on preventing domestic violence and has relevant laws covering the scourge.

But activists say the government must be much more proactive in applying the laws and working to protect women.

They point to a lack of shelters for women in need and underscore the importance of addressing the broader issue of gender inequality in Turkish society.