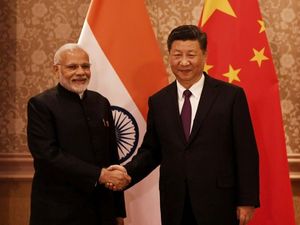 Kashmir, divided between India and Pakistan since 1947, has been the spark for two wars between the nuclear-armed arch foes, and India's scrapping of the region's semi-autonomous status in August has further inflamed tensions.

Xi told Khan at talks in Beijing ahead of the Chinese leader's meeting with Modi in Chennai on Friday and Saturday that Beijing was paying close attention and that the facts are clear, the Xinhua state news agency reported.

"China supports Pakistan to safeguard its own legitimate rights and hopes that the relevant parties can solve their disputes through peaceful dialogue," Xi said.

A joint statement added that China "opposes any unilateral actions that complicate the situation" while the dispute "should be properly and peacefully resolved based on the U.N. Charter, relevant U.N. Security Council resolutions and bilateral agreements."

India's foreign ministry said however: "India's position has been consistent and clear that Jammu & Kashmir is an integral part of India. China is well aware of our position. It is not for other countries to comment on the internal affairs of India."

India and China's ties have historically been testy, and recent events surrounding Kashmir -- in particular Beijing's diplomatic support to Islamabad at the United Nations -- have added to strains.

"China sympathizes and supports the situation faced by Pakistan on this issue. So, at present, the relationship between China and India has reached a very delicate point," said Cheng Xiaohe at the Department of International Politics at Renmin University.

India's move in August to split Jammu and Kashmir state into two irked China because it will make the Ladakh region of the state a separate Indian administrative territory.

China thundered in August that India had "continued to undermine China's territorial sovereignty by unilaterally changing its domestic law."

Beijing claims parts of Buddhist-dominated Ladakh, perched on a steep Himalayan border with China's restive Xinjiang to its north and Tibet to the east. India too says part of Ladakh under Chinese control belongs to New Delhi.

Last month Indian and Chinese troops engaged in what Indian media called a "scuffle" in Ladakh, in the same location where soldiers from the two nations threw stones at each other in August 2017.

That coincided with a much more serious face-off in the Doklam plateau claimed by both China and Bhutan, when Chinese soldiers started building a road and India sent its forces to halt the process.

Xi and Modi appeared to patch things up when they held a first informal summit in the Chinese city of Wuhan in April 2018.

But since then, in addition to events in Kashmir, India recently upgraded its participation in the Quad -- a grouping with the United States, Australia and Japan that Washington hopes will counter China.

India and China, home to more than a third of humanity, also have differences over trade, with both wanting greater market access, even if they share a common adversary in U.S. President Donald Trump.

Xi, 66, was expected to press Modi, 69, to allow Chinese telecoms giant Huawei to take part in 5G trials, something which Washington has been pressing New Delhi not to permit because of security concerns.

"Frankly, the optics surrounding this visit don't look very promising at the moment," Harsh Pant, an international relations professor at King's College London, told AFP. "If at all, the dynamic has become more conflictual."

After India, Xi was due to make a state visit Nepal on Saturday and Sunday, the first by a Chinese president in more than two decades. India is also worried about losing influence to China there.