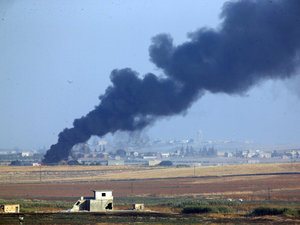 The Netherlands summoned Turkey's ambassador on Wednesday to condemn Ankara assault on Kurdish forces in northern Syria, warning that it risked a resurgence of the Islamic State group.

Dutch Foreign Minister Stef Blok, whose country is part of an international coalition against IS, said there could also be "terrible humanitarian consequences" from the Turkish offensive.

"The Netherlands condemns the Turkish offensive in northeast Syria. I have summoned the Turkish ambassador. I call on Turkey not to follow the path it has chosen," Blok said on Twitter.

"No one can benefit from the potentially terrible humanitarian consequences. The operation can trigger new refugee flows and harm the fight against IS and stability in the region."

Fellow NATO member Turkey launched an assault aimed at curbing the Kurdish-led Syrian Democratic Forces (SDF), after President Donald Trump ordered the pullback of U.S. troops from the Turkey-Syrian border which had served as a buffer.

The SDF was previously allied to the U.S., which used it to crush the Islamic State group. But Turkey says it is linked to Kurdish insurgents inside its own territory.

The Netherlands has been part of the anti-IS coalition since 2014. In May more than 50 Dutch soldiers were still training Kurdish troops in Erbil in Iraq as part of the coalition.

The Dutch diplomatic protest against Turkey comes only a year after the two countries renewed relations, after a freeze caused when two Turkish ministers were barred from a Rotterdam rally and riots ensued.