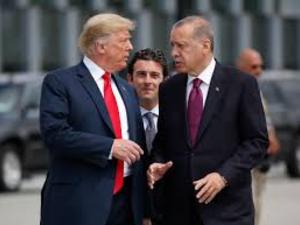 In launching an offensive against Kurdish forces in Syria, Turkey is risking a new low in relations with the United States including potentially painful sanctions, even if President Donald Trump may prove sympathetic.

Air strikes and artillery fire erupted at the border Wednesday as Turkish President Recep Tayyip Erdogan announced the operation, three days after Trump told him he would withdraw U.S. troops effectively serving as a buffer.

While Trump has long sought to extricate the United States from Syria's civil war, his decision triggered sweeping criticism from U.S. lawmakers who want to protect the Kurdish forces, who led the fight against the Islamic State group.

"Pray for our Kurdish allies who have been shamelessly abandoned by the Trump Administration. This move ensures the reemergence of ISIS," said Lindsey Graham, a senior Republican senator who is usually a steadfast supporter of Trump.

"Will lead effort in Congress to make Erdogan pay a heavy price," he warned on Twitter before taking his message to "Fox and Friends," a favorite show of the television-loving Trump.

Faced with harsh rebukes, the mogul turned president -- already under pressure in an impeachment inquiry -- has sent mixed messages and threatened on Twitter to "obliterate" Turkey's economy if it did anything that went against his "great and unmatched wisdom."

Democrats also roundly criticized Trump, who enjoyed support only from a handful of isolationalist lawmakers.

"We have extraordinary leverage with Erdogan: why wouldn't the president get a deal with Turkey before withdrawing U.S. troops?" asked Representative Ro Khanna, a Democrat who has emerged as a leading critic of war hawks.

Gonul Tol, director of the Turkey program at the Middle East Institute in Washington, said that Erdogan was looking primarily at domestic considerations, especially after his party's humiliating loss in Istanbul local elections.

Erdogan links the Kurdish fighters, who head the Syrian Democratic Forces, to separatist militants at home and brands them as "terrorists" -- and is also hoping to send back some of the 3.6 million Syrian refugees in Turkey.

"I think that Congress is definitely going to push for sanctions and, if that happens, this will mean a new low in Turkish-American relations, and that's going to be bad news for Erdogan as well because the economy matters a lot to him," Tol said.

With Trump known to break diplomatic norms, Erdogan likely sees the US leader as similar to him, with his every word becoming policy, Tol added.

"He has invested so much in the relationship with President Trump and has complete faith in their chemistry," she said.

"Obviously that's not a wise decision because it completely disregards the role that Congress and other institutions play."

- Sympathetic Trump in past -

Erdogan has seen that Trump can push back against congressional anger in the past.

But Trump last year slapped tariffs that threw the Turkish lira into a tailspin as he successfully sought the release of Andrew Brunson, a U.S. pastor whose detention in the Muslim-majority country made him a cause celebre among Trump's evangelical Christian base.

"President Trump has proven that he does not want to alienate Erdogan. But when he feels threatened or pushed, he could act otherwise," Tol said.

Nicholas Danforth, an expert on U.S.-Turkey relations at the German Marshall Fund of the United States, said Erdogan feels he has a "good deal of leeway" due to Trump's ambiguous threats and past hesitation at sanctions.

"If Turkey's military operation becomes too violent or too expansive or simply gets too much negative publicity in Washington, congressional sanctions are a real risk as well."