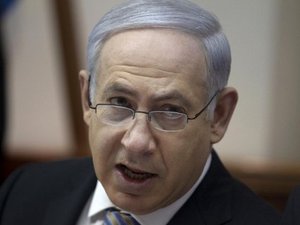 Israeli Prime Minister Benjamin Netanyahu condemned Wednesday's deadly shooting outside a synagogue in the German city of Halle as symptomatic of rising anti-Semitism in Europe.

"The terrorist attack on the community in Halle in Germany on Yom Kippur is a new expression of anti-Semitism on the rise in Europe," he tweeted.

"I urge German authorities to continue to act resolutely against the phenomenon of anti-Semitism," Netanyahu said.

Israeli President Reuven Rivlin, in a statement, warned that anti-Semitism was "not a problem of the Jews alone, but threatens to destroy us all."

At least two people were shot dead in Halle with witnesses saying the synagogue was among the gunmen's targets as Jews marked the holy day of Yom Kippur.

Israel has legalized anti-Semitism, since Arabs are Semites. I should say, Israel has "legalized" anti-Semitism. You can't make a wrong thing the law, no matter how many people you kill.