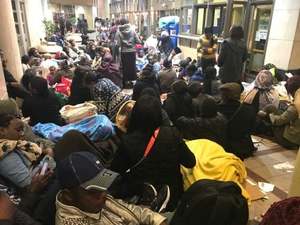 Dozens of foreign nationals on Wednesday camped outside the Cape Town offices of the UN refugee agency demanding to be removed from South Africa saying they were no longer safe.

Around 250 foreigners, many claiming to be asylum seekers from various African countries, vowed not to leave the premises until the  United Nations High Commission for Refugees (UNHCR) addressed their concerns.

Wrapped in blankets, women and children lay on mats, while men paced up and down, according to AFP journalists.

"We are here because we want the UN and other organisations to help ...refugees, to take us somewhere safe," Radjab Mugemangango 47, a Rwandan Uber driver, told AFP.

"There is no peace in South Africa, it’s not safe!" said an emotional Mugemangango.

In August and early September, the country saw a wave of xenophobic violence that left 12 people killed, most of them South Africans, when mobs descended on foreign-owned stores in and around Johannesburg, destroying properties and looting.

South Africa is a magnet for economic migrants searching for better job prospects and asylum seekers looking for safety.

The continent's most industrialised economy attracts people from neighbouring Lesotho, Mozambique and Zimbabwe.

Others come from farther afield including the Democratic Republic of Congo, Rwanda, Burundi, Ethiopia, Malawi, Nigeria and South Asian countries.

Seen as competing with locals for jobs, they are often the first to come under fire when South Africa's chronic unemployment, inequality and poverty boils into xenophobic outlash.

"Everywhere we are facing discrimination, there is no dignity for refugees in this country. We are tired," said Sukami, pleading with the UNHCR to "find peace for us".

Nigerian President Muhammadu Buhari last week denounced recent xenophobic violence in South Africa as an "embarrassment" for the continent, as he wrapped up a state visit here.

The violence sparked fury in Nigeria and saw hundreds of migrant workers repatriated.