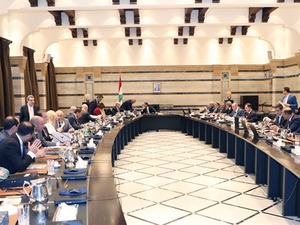 “The Cabinet discussed all the proposals sent by the financial and economic reform committee. There is a positive inclination to approve the elderly pension law, the customs law and the tax law as soon as possible,” Information Minister Jamal al-Jarrah said after the session.

“There is a study about the associations that take contributions from the state, to check which of them are useful and serve society, so that they continue to get contributions. For those that do not work, the contribution of the state will be reduced or canceled. The fuel spending for all state institutions and administrations in general was reduced,” Jarrah added.

He said: “The Council of Ministers will hold a session at 4 pm next Monday and the reforms committee could hold a session before it. The issue of retirement has also been discussed and studies will be done on retirement and deductions. A decision was taken to place scanners at customs crossings to control the smuggling of goods into Lebanon. There is an almost complete agreement on laws on public procurement, tax liability, customs and elderly pension. Some figures in the budget were completed today.”

Anyone has intel abt these? Tax law pension law? What is it about?