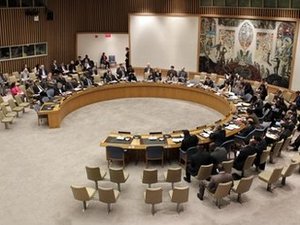 The five European members of the U.N. Security Council called Thursday for Turkey to halt its offensive against Syrian Kurdish forces.

"We are deeply concerned by the Turkish military operation in northeast Syria," the countries -- France, Germany, Britain, Belgium and Poland -- said in a joint statement after an emergency meeting.

"We call upon Turkey to cease the unilateral military action as we do not believe it will address Turkey's underlying security concerns," they said.

At this stage, the countries have not gained the support from all council members for the declaration, diplomats said.

According to one of them, the United States would consider adopting a common position on the council later, but it could face opposition from Russia unless the text was very weak.

In a separate statement, U.S. Ambassador to the UN Kelly Craft said that if Turkey does not "protect vulnerable populations" or does not guarantee that the Islamic State (IS) group "cannot exploit these actions to reconstitute," there will be consequences.

Craft reiterated U.S. President Donald Trump's administration's assertion that the American government "has not in any way endorsed the decision of the Government of Turkey to mount a military incursion into northeast Syria."

But Trump cleared the way for the Turkish offensive against the Kurdish forces -- who led the fight against IS in Syria -- by withdrawing American troops from the country's northern frontier.

"Turkey is now responsible for ensuring that all ISIS fighters in detention in prison, remain in prison and that ISIS does not reconstitute itself in any way, shape, or form," Craft said, referring to IS.

In their statement, the European countries expressed concern that the Turkish offensive risks providing "fertile ground" for IS.

One aim of Ankara's operation is to establish a "safe zone" in which at least one million Syrian refugees can be repatriated from Turkey.

"It is unlikely that a so-called 'safe zone' in northeast Syria, as envisaged by Turkey, would satisfy international criteria for refugee return as laid down" by the U.N. Refugee Agency, the European countries said, adding: "Any attempt at demographic change would be unacceptable."

In a letter to the Security Council on Wednesday, Ankara said that the operation was being conducted within the framework of "the right of self-defense as outlined in Article 51 of the U.N. Charter, to counter the imminent terrorist threat, to ensure Turkey's border security, to neutralize terrorists."

"As has been the case in its previous counter-terrorism operations, Turkey's response will be proportionate, measured and responsible," the letter said.

"Turkey will carry out this operation in support of efforts to facilitate safe and voluntary returns of displaced Syrians to their homes of origin or other places of their choices in Syria in line with international law and in coordination with relevant U.N. agencies," it said.