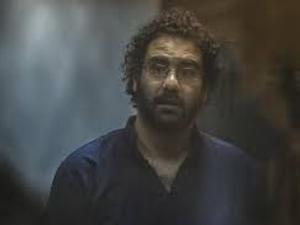 Amnesty International on Thursday accused Egyptian authorities of torturing detained activist Alaa Abdel Fattah, denouncing what it described as the use of "extreme brutality" to crush dissent.

"The torture in custody of Alaa Abdel Fattah... as well as the mistreatment of his lawyer Mohamed el-Baqer, are chilling illustrations of the ruthless tactics the Egyptian authorities are prepared to use to silence critics," Amnesty said in a statement.

Abdel Fattah, 37, an iconic figure of the Arab Spring uprising that unseated longtime autocrat Hosni Mubarak in 2011, was detained at the end of September, his family and a judicial official said.

His lawyer Baqer was also later detained while attending an interrogation of the activist, the Egyptian Center for Economic and Social Rights said.

Following his arrest on September 29 Abdel Fattah was "transferred to Egypt's notorious Tora maximum prison 2... where prison officers blindfolded him, stripped him of his clothing, beat and kicked him repeatedly and subjected him to threats and verbal abuse", Amnesty said.

"One police officer told him prison was 'made for people like you', adding that he would be in prison for the rest of his life," the rights watchdog said.

"A National Security Agency officer warned he would face further torture if he reported the abuse," it added.

"Alaa Abdel Fattah's torture in custody illustrates the Egyptian authorities' use of extreme brutality to crush dissent and shows the extreme lengths that they are prepared to go to in order to intimidate perceived government critics," said Amnesty's Najia Bounaim.

Baqer was also held at Tora prison "in a cell with poor ventilation and was blindfolded, stripped of his clothes and verbally insulted by prison guards who also prevented him from showering for nine days," Amnesty said.

The rights group urged the immediate release of the pair.

Abdel Fattah was serving five years of probation after completing a five-year jail sentence in March for staging a protest against a 2013 law effectively banning public gatherings.

His probation required him to report to a police station near his home in Cairo at 6:00 pm every evening, and stay overnight in a cell until 6:00 am. On the morning of his arrest, however, he was not released.

A prolific tweeter, he had commented on small-scale unrest against President Abdel Fattah al-Sisi that erupted in September following an online call for protests by an exiled Egyptian businessman.

Some 3,000 people, including lawyers, activists, professors and journalists, were detained in a wave of arrests following the protests, rights groups say.