Trudeau, Scheer Even ahead of Canada Election Debate, Polls Show 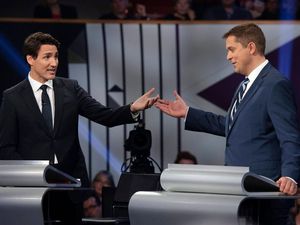 Prime Minister Justin Trudeau's Liberals are neck and neck with Conservatives in the Canada's October 21 elections race, with neither party likely to win an absolute majority, polls showed as party leaders headed into a final debate Thursday.

The Liberals and Andrew Scheer's Conservatives both have support from 31 percent of Canadian voters, down three percentage points over the past week to the benefit of two smaller parties, according to a poll published Wednesday evening by the Leger Institute.

"A minority government, regardless of affiliation, is looking more and more likely," said Christian Bourque,  vice president of Leger, which conducted the survey on Monday and Tuesday for The Canadian Press.

The CBC's survey aggregator found Thursday that 33.9 percent of Canadians intend to vote Liberal, versus only 33 percent for Conservatives.

These results give Trudeau a slight advantage in forming a minority government.

The Leger poll also showed an increase in support for Bloc Quebecois separatists in Quebec, and for the New Democratic Party after the first two televised debates, in which their respective party leaders, Yves-Francois Blanchet and Jagmeet Singh, made positive impressions on the 2,150 people surveyed.

Created in 1991 to defend Quebec's idea of independence in the Ottawa parliament, Bloc Quebecois is running mainly on a secularism law adopted over the summer by Quebec's provincial government.

Popular in Quebec but criticized elsewhere in Canada, the law forbids several categories of public servants in positions of authority, including teachers, from wearing religious symbols.

Bloc Quebecois has 29 percent support from voters in Quebec, the only province where its candidates are running, an increase of eight percentage points that has the party nipping at the Liberals' heels.

Quebec, where one quarter of the 338 seats in parliament are up for grabs, is with Ontario the province wooed most heavily by the major parties.

The NPD is in third place with 18 percent support, up four percentage points over the past week, ahead of the Greens who have remained steady at 11 percent.

Trudeau and the five other party leaders will cross swords for a final televised debate Thursday evening, which will be conducted in French.