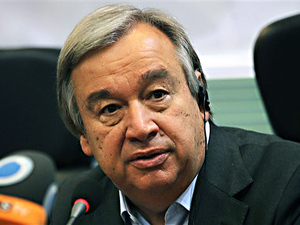 U.N. Secretary General Antonio Guterres on Thursday expressed his "deep concern" at the spiraling violence in Syria a day after Turkey launched an offensive in Kurdish-controlled areas.

"I want to express my deep concern about the escalation of conflicts we are witnessing in eastern Syria," Guterres told a press conference in Copenhagen.

He said any solution to the conflict needed "to respect the sovereignty of the territory and the unity of Syria."

His remarks came as the five European members of the U.N. Security Council -- France, Germany, Britain, Belgium and Poland -- called on Ankara to halt its military operation against Syrian Kurdish forces.

The Turkish military, supported by Syrian proxies, began its offensive in northeastern Syria on Wednesday, shortly after the US withdrew its troops from the area -- a move which effectively saw America abandon its Kurdish allies in the fight against Islamic State (IS).

Turkey says its operation is aimed at pushing back Syrian Kurdish forces, which it considers "terrorists", and establishing a "safe zone" for the return of Syrian refugees.

But the intervention has sparked international anger, raising fears of a new refugee crisis and concern that thousands of jihadists being held in Syrian Kurdish prisons could use the opportunity to escape.