U.N. Calls for Greater Heat Protection for Workers in Qatar 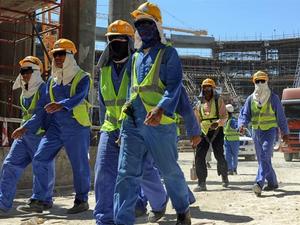 Improved safeguards and working hours are needed to protect laborers in Qatar from the effects of heat and humidity, the United Nations said Friday, as it published new research.

The desert monarchy has come under fire for conditions faced by its hundreds of thousands of migrant workers, as it prepares to host the 2022 World Cup.

The risks of Qatar's heat and humidity were again thrust into the spotlight at the recent World Athletics Championships in Doha when women's marathon runners collapsed because of the conditions, despite the race being staged at midnight.

Humidity hovered around 73 percent and the temperature was 33 degrees Celsius (91 degrees Fahrenheit) for much of last month's race.

The study, commissioned by the International Labor Organization (ILO) and Qatar's labor ministry, praised measures taken to reduce the effects of heat on 4,000 workers at one World Cup stadium project.

It concluded that while the heat mitigation steps taken by the body responsible for delivering the football showcase were "moderately to highly acceptable", other employers in Qatar could improve protections.

The head of the U.N. agency's Qatar project office, Houtan Homayounpour, said the project was working with the government to turn the study's recommendations into "improved legislation."

Workers need to be able to set their own pace, he told AFP, in terms of "when to stop, when to have a break, when to drink water -- it's very important... They know best how they feel."

"We'll be promoting this very hard across the country in collaboration with the Ministry of Labor."

Homayounpour said the research also indicated a need to extend the ban on work during the hottest hours of the day, as well as the period of the year to which it applies.

The law currently states that work on exposed sites must stop between 11:30 am and 3:00 pm between June and August.

Researchers from the University of Thessaly in Greece reviewed more than 5,500 hours of work as part of their research, the largest ever study of its kind and the first in the region.

The study tracked environmental conditions over summer this year and the physiological responses of 125 workers subjected to different heat mitigation strategies.

It compared practices at the under-construction 40,000-capacity Al-Rayyan stadium west of Doha with a rural farm, looking at the impact of hydration, work-rest ratios and clothing on heat strain.

Workers on the stadium project, run by the Supreme Committee organizing the World Cup, mitigated conditions through frequent breaks as well as access to shade and water, according to the study.

Projects run by Qatar's Supreme Committee are acknowledged by human rights groups to generally offer their workers better protections and rights than schemes not under the supervision of the World Cup organizers.

The study, published by Cardiology Journal in July, probed the "relationship between deaths of more than 1,300 Nepali workers between 2009 and 2017 and heat exposure," according to HRW.

Government spokesman, Sheikh Jassim bin Mansour Al-Thani, said: "Qatar has worked relentlessly for years... to ensure the well-being and safety of all workers" and that "to suggest otherwise is false and misleading."

Qatar is now "leading the region on workers' health and safety", he said in a statement, adding that summer working rules had been "strictly implemented" and more than 300 work suspension cases were ordered in summer 2019.