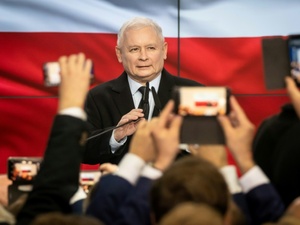 Poland's governing right-wing populist party was poised to win a weekend election, latest results showed, and appeared on track to keep a parliamentary majority that would allow it to pursue a judicial reform agenda that has put it at loggerheads with the EU.

The triumph by the Law and Justice (PiS) party followed a campaign focussed on a raft of new welfare measures coupled with attacks on LGBT rights and Western values.

"We have four years of hard work ahead. Poland must change more and it must change for the better," said PiS party leader Jaroslaw Kaczynski after an exit poll showed him winnign with an expanded majority.

His party controlled 239 of the 460 seats in last parliament. Near full official results provided by the state elections commission on Monday did not provide a seat count.

Condemning the PiS's anti-LGBT drive and close church ties, but sharing the its welfare goals, the left returned to parliament after a four-year hiatus.

A far-right libertarian party, known for its anti-EU views, also made it over the five percent threshold to enter parliament.

Experts believe that a strong PiS win would see it continuing court reforms that risk undermining judicial independence and the rule of law, something likely to further stoke conflict with the European Union.

The PiS scored 44.57 percent of the vote, outpacing the centrist Civic Coalition (KO) opposition with 26.65 percent support and a leftist coalition that took 12.27 percent, based on 91 percent of official results published by the state elections commission on Monday.

The PSL farmers/Kukiz 15 alliance took 8.63 percent of the vote for 30 seats.

In office since 2015, Kaczynski's PiS has focussed on poorer rural voters, coupling family values with the introduction of welfare state spending like a popular child allowance, tax breaks for low-income earners and hikes to pensions and the minimum wage.

"The PiS is finally taking care of the weakest, most vulnerable members of society," Kasia, a 40-year-old psychologist working at a women's shelter, told AFP after voting in Warsaw on Sunday. "I've seen it first hand at work."

He is among several populist leaders in the European Union seeking greater national sovereignty over the federalism championed by France and Germany.

The PiS has sought favour with the Trump administration. Poland has long regarded the United States as the primary guarantor of its security within the NATO alliance and as a bulwark against Russia, its Soviet-era master with whom tensions still run high.

"I voted for democracy, to safeguard the future of my grandchildren," Jadwiga Sperska, a 64-year-old working pensioner and KO supporter, said outside a Warsaw polling station.

"The current government's direction could lead us out of the EU," she added.

"I support an open, tolerant society, without aggression and with same-sex unions," said Monika Pronkiewicz, a 31-year-old public sector worker and left-wing voter in Warsaw.

Kaczynski has tapped into a populist backlash against liberal elites, similar to trends in Western Europe and the US.

His party's bid to build a welfare state appeals to Poles who felt left behind amid the explosive growth and unfettered free-market drive after communism fell in 1989.

Analysts suggest the social outlays have made the PiS a "teflon party", cushioning its reputation amid a string of graft scandals involving senior members.

A tight labour market in the EU country of 38 million people saw it become the world's top temporary migrant labour destination in 2017, according to the OECD.