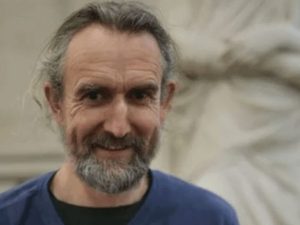 A co-founder of the Extinction Rebellion movement is to face trial over an alleged attempt to disrupt air traffic at London's Heathrow Airport using a drone, a judge ruled Monday.

Judge Martin Edmunds said Roger Hallam will be tried on February 17 on a single charge of conspiring to cause a public nuisance.

Hallam, 53, was not in court but followed proceedings via video link from prison where he is being held on remand. He spoke only to confirm his name, date of birth and nationality.

No plea was entered.

The bearded activist from Wandsworth, southwest London, was one of a number of people held in September after a protest by an offshoot of Extinction Rebellion, Heathrow Pause.

The group, which is against the construction of a third runway at Heathrow, aimed to disrupt the travel plans of tens of thousands passengers by flying toy drones near the airport.

But the devices failed to get off the ground, prompting claims from activists that police had used jamming devices.

London's Metropolitan Police have moved to try to minimize wide-scale disruption in the British capital since the start of a two-week Extinction Rebellion protest which began last week.

A total of 1,336 people had been arrested up to 8:00 am (0700 GMT) on Monday, Extinction Rebellion said. Among those arrested was a man dressed as a head of broccoli.

Protesters meanwhile brought rush-hour traffic to a standstill by blocking roads outside the Bank of England in the City of London financial district.

Specifically, they claimed trillions of pounds (dollars, euros) are pumped through London's financial markets investing in fossil fuels that damage the climate.

Among those arrested on Monday was a rabbi, protesters said.