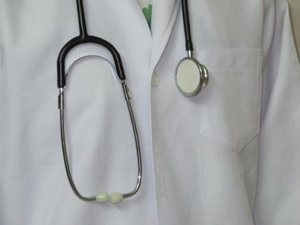 The British showrunner behind such record-breaking hits as "The Bodyguard" and "Line of Duty" said the myth of the super-caring hospital doctor was a load of rot.

"A lot of medical dramas still work on the idea that someone comes into a very busy hospital, and alongside their medical problem, they receive a talking cure about their family and emotional problems from the doctors," Mercurio said.

But as "anyone who has ever been in hospital knows, they don't care and they don't have the time," he insisted as he received an award at MIPCOM, the world's biggest entertainment market, in the French Riviera resort of Cannes.

Mercurio said almost no one dares to portray "that cynicism that starts to infiltrate your work as a doctor when human suffering becomes quite banal to you.

"A lot of medical dramas still show doctors to be very idealistic, and very invested in the patient's well-being, not just in terms of the medical process."

The Emmy winner made his name with "Cardiac Arrest" -- voted the most realistic hospital drama by British medical professionals -- and "Bodies", which he adapted from his own novel.

Mercurio said he was prompted to start writing because dramas were "very unrepresentative of what was going on in our health service".

But despite his efforts, the myth of the empathic, idealistic doctor will not die.

"The  way that the medical profession was portrayed on TV played a big part in me choosing to be a doctor," said the miner's son, whose family were Italian immigrants.

"I was seduced by the myth of the glamour and then found it was very different."

Mercurio, 53, was working as a hospital doctor when he replied to an advert in the British Medical Journal looking for a specialist to advise on the script of "Cardiac Arrest".

Having begun his career in aviation medicine in the RAF as a pilot officer in its medical branch, he became an anonymous adviser on the show and then began writing the scripts himself.

"I had never written in my life. It was not something that was open to people of my background or the school I went to," he added.

Mercurio said that when he was coming up with "Line of Duty", about a police anti-corruption unit, the British police force he approached said they "did not want to get involved with anything that showed police officers making mistakes."

He said top brass are obsessed with PR and in denial of problems within their institutions.

"A lot of very senior police officers go on public platforms and say, 'We don't do the kind of things that are depicted in the show'.

"But at the same time we can produce news stories that show that not only did police do that, but they actually did it themselves," he added.

Mercurio said while "Line of Duty" was fiction, "if you did a genuine police corruption show it would always be about police officers wanting to make money out of their position.

"Occasionally it is also because they are lazy and they can't be bothered to investigate a case properly. But we don't do either of those..." on "Line of Duty".