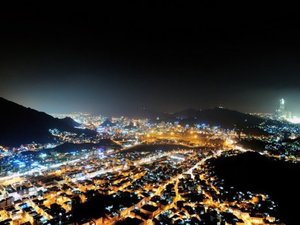 Saudi Arabia has inked an $8.22 billion deal with a Spanish consortium to build a high-speed railway on the Muslim pilgrim route between Mecca and Medina, the state news agency SPA reported Saturday.

The project aims to provide transportation for Muslim pilgrims between the two holy cities of Mecca and Medina through the Red Sea-port city of Jeddah, a distance of 450 kilometers.

Some 2.5 million Muslims from around the world join the annual hajj pilgrimage to Mecca. The two holy cities also attract Muslim pilgrims year round, and, along with Jeddah, are the main hubs of the kingdom's western region.

Trains on the high-speed lines will travel at 320 kilometers per hour, taking passengers from Mecca to Medina in two and a half hours and carrying an estimated 166,000 passengers a day.

The project includes building the rail line, supplying 35 high-speed trains and a 12-year maintenance contract, with the possible future purchase of an additional 23 trains, the Spanish and Saudi authorities said.

Spain has become a world leader in high-speed rail networks and now has the longest such system in Europe, ahead of France which pioneered the technology.