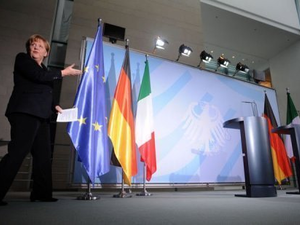 "We are now called upon to implement quickly the fiscal pact, to implement it with determination... and not try to again soften it," she told reporters in the northern German city of Kiel.

Merkel, in her first reaction since Standard and Poor's decided to cut the ratings of nine Eurozone nations, also said that Europe's permanent bailout fund must be effective as soon as possible.

"The decision confirms my conviction that we in Europe still have a long road ahead of us until investor confidence is again restored," she said at the gathering of her conservative Christian Democratic Union party.

"But it's also apparent that we have pursued resolutely this road of a stable currency, solid finances and sustainable growth," she said.

Merkel stressed that Standard and Poor's, which Friday decided to cut the ratings of nine Eurozone nations including top-rated Austria and France but not Germany, was just one of three ratings agencies.

She said Germany had "taken note" of the decision. "It did not totally surprise us after the discussions of recent weeks," she said.

And she pointed out a need for balance after a report earlier in the week by Fitch ratings agency that it did not foresee a downgrade for France in 2012 unless the country received significant economic shocks.

Merkel also commented that she did not believe the ratings downgrade would impact on Germany's contribution to the European Union's bailout fund, which is currently the EFSF with a lending capacity of 440 billion euros.

Its successor, the European Stability Mechanism, is due to take effect in July 2012 with funding of 500 billion euros.

"I do not believe that the downgrade in any way has an influence on Germany having to do more compared to others," Merkel said.

The temporary EFSF fund uses guarantees issued by Eurozone governments to raise financing on money markets which are then lent to debt-wracked Eurozone countries.

German Finance Minister Wolfgang Schaeuble also sought Friday to play down the ratings downgrade of France and Austria, insisting Eurozone nations were on the "right path" and warning against overestimating its impact.

"In recent months, we have increasingly come to an understanding worldwide that we should not overestimate the ratings agencies in their assessments," he told television station RTL.

But the eurozone economy was plunged back into crisis as France and Austria were reduced from AAA to AA and talks to agree a Greek debt write-down stalled.

European Union leaders, apart from Britain, agreed last month to write a new pact to toughen budget discipline across the bloc and will gather on January 30 in Brussels to again discuss it.

The aim of the pact is to convince the markets that the Eurozone can prevent a new crisis like the one that has forced Greece, Ireland and Portugal to take bailouts and is driving Italy and Spain to the edge.