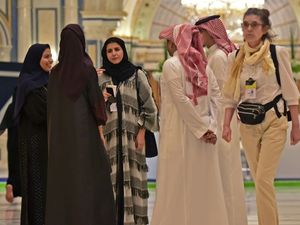 Many foreign women at Saudi Arabia's Davos-style investment conference have donned an array of colorful tunics, happily avoiding the austere black "abaya", a garment until recently obligatory in the ultra-conservative country.

Alongside Saudis in traditional dress and foreign men in ties and suits, women from the ranks of business and policy-making are visiting Saudi Arabia at a time when its young leader is introducing some striking reforms.

"This year, I noticed that a lot of females are not wearing the abaya," said Claire Zheng, who was representing a Chinese company specializing in "green energy" technology.

"They are like me -- like today I'm wearing an abaya freely open, like this," she told AFP, gesturing to her long purple tunic embellished with small luminous pearls.

She said she felt more comfortable visiting Riyadh at time when "the abaya is no longer obligatory", unlike previous editions of the annual Future Investment Initiative, the kingdom's marquee event.

"Before if some waiters saw you wearing this kind of abaya, with the colors and not covered up, then they were kind of reminding you kindly you have to wear it properly in public. But now they don't."

Zheng was among hordes of business visitors to the event, as the kingdom seeks to escape the shadow of the early October 2018 killing of critic Jamal Khashoggi in its Istanbul consulate -- a murder that saw last year's FII largely shunned.

Under the leadership of de facto ruler Crown Prince Mohammed bin Salman, Saudi has embarked on a series of landmark changes -- allowing women to drive, opening the country up to tourism, and permitting concerts and sporting events.

The end of the abaya requirement for foreign women came late last month as part of the kingdom unveiling tourism visas.

But the dress code relaxation does not extend to female Saudi citizens.

The controversial "guardianship" system, which ensures Saudi women are under the close supervision of a male relative, also remains in place.

Critics pushing for faster reform have ended up in jail, notably nearly a dozen women arrested just weeks before the kingdom lifted the ban on female motorists last year.

Those activists have accused interrogators of subjecting them to electric shocks, flogging and groping.

But Zahara Malik, the British CEO of a new investment firm, welcomed the changes made so far and said that women were already a "very powerful force" in the region.

"I've seen women who are still observing the abaya, and others not, you just have to be respectful to where you are," said Malik, who herself wore a modern grey abaya created by an Emirati designer friend.

"You shouldn't be pressured by anything. If you feel empowered wearing a niqab, wear the niqab, but if you also feel empowered not wearing it...  that also gives more power to you."

Other foreign women at the conference, held in the expansive, marble-decked halls of the Ritz-Carlton, were similarly enthused about the changes under way in the kingdom.

"You can feel it, you can see it everywhere," said Jocelyn Cortez-Young, the American CEO of a tech firm.

"This is a very big movement and I think it’s only the beginning of all the movement that needs to take place."

Laurence Daziano, a French economist who wore a business-style black pantsuit and white shirt, said she decided to come to Saudi Arabia "the day I could come in Western clothes".

"I'm totally Western-style and I've had absolutely no problem," she said, adding that she had gone for neutral colors and modest styles.

"I respect the customs of the country, but nevertheless I dress like this when I'm in Paris and there's no question I would dress differently here."