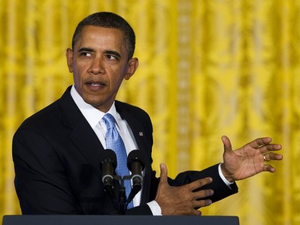 U.S. President Barack Obama promised Saturday new tax incentives for companies that create jobs in the United States -- and punishment for those who export them overseas.

In his weekly radio and Internet address, the president said that in the next few weeks, he will "put forward new tax proposals that reward companies that choose to do the right thing by bringing jobs home and investing in America - and eliminate tax breaks for companies that move jobs overseas."

He did not elaborate.

The comments came after Obama held a White House summit with business leaders this week to discuss ways of bringing outsourced American jobs back home while growing the U.S. economy.

The president said he had pledged these business leaders his firm support if they continue on the path of job creation.

"I'll make sure you've got a government that does everything in its power to help you succeed," he said.

The president also showcased his plan to merge six U.S. trade and commerce agencies in an effort to cut red tape for businesses and end government overlap.

"These changes will make it easier for small business owners to get the loans and support they need to sell their products around the world," Obama said.