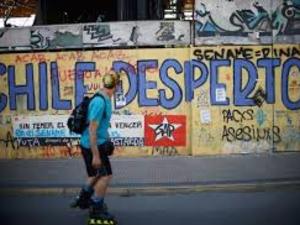 A visitor wondering what the deadly unrest in Chile is about can learn a lot from the graffiti that has blanketed the capital's streets.

AFP has photographed some of the striking slogans and murals in Santiago as Chileans vent their rage at the government.

Protests against a rise in traffic fares swelled into a general outpouring of rage at economic hardship, expensive education and healthcare and tight pensions.

Many of the graffiti made a scrawled plea for "Dignity".

"They won't keep us quiet any longer," the slogans warn. "The status quo is slavery for us."

After starting three weeks ago, the demonstrations descended into deadly clashes between protesters and police.

Twenty people have been killed in the unrest. U.N. human rights authorities are investigating allegations of police brutality.

"They kill, rape and torture," the graffiti say.

"They are drinking the blood of the people."

Countless graffiti cry out for his resignation -- or worse.

He at first responded to the unrest by claiming the country was "at war".

"We are not at war," the graffiti roared back.

The protesters are demanding constitutional reform. Chile's current constitution dates back to the 1973-1990 dictatorship of Augusto Pinochet.

The words "New constitution!" are scrawled on walls in giant letters.

Several opposition parties and officials have backed plans to discuss a new constitution.

Among the puns and rhetorical figures of speech, classic revolutionary language screams from the murals: injustice, rebellion, victory.

"The rich ones' democracy is the poor ones' dictatorship."

Graffiti specialist Alvaro Ramirez says the outpouring of street painting in Santiago is reminiscent of the 1970s, when artists would defy the curfew to go out and paint murals.

The whole length of Santiago's eight-kilometer (five-mile) Alameda avenue has been covered in paintings and slogans. Some murals commemorate those killed in the unrest.

Only one building has escaped the graffiti: the heavily guarded La Moneda presidential palace.