Israel Film Gets inside Head of Yitzhak Rabin's Killer 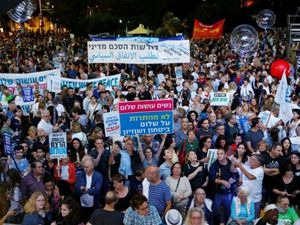 An Israeli film released to coincide with the 24th anniversary of the assassination of former prime minister Yitzhak Rabin offers fresh insight into his killer -- and contemporary politics in Israel.

The killer opposed Rabin signing the Oslo autonomy accords with the Palestinians and the assassination dealt a serious blow to the peace process.

The name of the killer still invokes trauma in Israel, and the decision to make a biopic humanizing Amir was a risky one for director Yaron Zilberman.

"Incitement" shows the killer as a complex figure.

Yehuda Nahari Halevi portrays Amir as the spoiled son of a domineering mother who promised him a messianic destiny, seeking in extremist rabbis the strength lacking in a father whose moderation he despises.

Everything is shown through the eyes of the killer: The inflammatory preaching of rabbis against surrendering any "Israeli land", attacks plaguing the country, and protests calling for the death of Rabin.

Eventually, "eliminating" the man responsible for Oslo becomes an existential and religious imperative for Amir.

The subject, which still haunts Israel's national conscience, could have repelled audiences and critics. Instead, 160,000 have seen "Incitement" in Israeli theaters, in a country where local films often sell fewer than 10,000 tickets.

The film has also been selected to represent Israel at the Oscars in the best foreign film category.

"Incitement" strikes a sensitive chord by portraying members of Israel's current political class -- including premier Benjamin Netanyahu -- as participants in the social climate that contributed to Amir's radicalization.

"I took the risk of showing him as a human being," Zilberman said, in order to reveal the factors that "led him to his act".

He added: "Among these factors there is at least one in our control to avoid the next assassination, and that is incitement."

"Incitement" includes archival footage alongside filmed scenes. One sequence shows Netanyahu at a right-wing protest in Jerusalem at which demonstrators brand Rabin a Nazi and traitor.

The scene has prompted anger from Culture Minister Miri Regev, who said the film suggested that Netanyahu participated in calls for violence against Rabin.

But Zilberman said the contemporary context was crucial to understanding Amir.

"The conventional wisdom was that this is an extremist weirdo, outside of society, a lone wolf who acted outside of any political camp... We discovered that this vision is totally untrue," he said.

He and his co-writers relied on psychiatric evaluations of Amir, interviews with security officials in charge at the time and meetings with Amir's relatives.

They also conducted more than 100 hours of telephone interviews with Amir, who is serving a life sentence.

If the film shows Amir in his complexity, there is also no doubt about his guilt.

For Zilberman, Israeli leaders -- chiefly Netanyahu, who was elected prime minister six months after Rabin's killing -- have not done enough to end incitement to violence.

"If things had been addressed properly then... I have no doubt that we would have a different leadership today and that incitement would not have become acceptable and mainstream," he said.

Co-writer Ron Leshem added: "Some people who were considered back then as lunatics are considered now as mainstream."

The film, Leshem said, also aims to contextualize the present.

"It is a story about today, the future of Israel, the vision of some people, who have lost faith in democracy and want to turn Israel into a theocracy or a religious state."