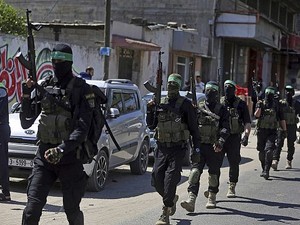 Hamas security forces in Gaza foiled an attempt by three suspected jihadists to sneak into Egypt and arrested them after an exchange of fire Friday, the Palestinian Islamist movement said.

The forces "foiled a dawn attempt to infiltrate Egypt by way of the southern Gaza Strip border", said the interior ministry of the Hamas-ruled coastal territory.

After shots were fired, "the three gunmen were arrested", it said, without reporting casualties on either side.

A Gaza security source told AFP that the three men were Palestinian members of "an extremist Salafist group", a term used to refer to backers of foreign jihadist movements.

Hamas, a movement which sprang from the Muslim Brotherhood, has ruled Gaza's two million inhabitants for more than a decade despite opposition from the Salafist movement, in particular jihadists.