Iraq Protests Dig in for Third Week, as Politicians Do the Same 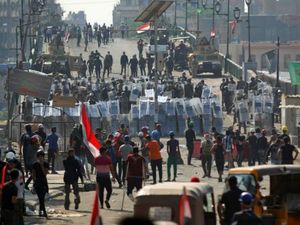 Anti-government protests in Iraq entered their third week on Friday amid fresh bloodshed, but leaders appeared to have closed rank around the country's embattled premier.

More than a dozen demonstrators had died in the capital Baghdad and the southern port city of Basra within 24 hours, medical sources told AFP on Friday.

That pushed the death toll since the first protests erupted on October 1 closer to 300, according to an AFP tally kept as officials have stopped providing updated figures.

In Basra, seven protesters were killed in confrontations on Thursday and early Friday, with security forces trying to reopen roads blocked by sit-ins, medical sources said.

For a week, protesters have cut access to Basra's Umm Qasr port, which brings in most of Iraq's food and medical imports.

Despite the violence, thousands again flocked to the capital's main protest camp in Tahrir (Liberation) Square on Friday, including members of Iraq's influential tribes.

"We sacrificed the blood of our tribe's sons," said one tribe member who had travelled from the southern city of Nasiriyah.

"We won't stop until the government resigns."

Throughout the night, loud blasts had echoed from around Tahrir as security forces tried to hold off protesters attempting to cross four bridges over the Tigris.

The bridges have become the main battlefront in Baghdad, as protesters mass around them in a bid to reach government offices and foreign embassies on the western bank.

To keep them back, security forces have built up barricades, fired volleys of tear gas and stun grenades and resumed using live ammunition in recent days.

Even the use of tear gas has been deadly, with medics and rights groups documenting security forces firing canisters at point-blank range instead of up in the air to allow the gas to disperse.

The canisters have pierced protesters' skulls and chests, with the United Nations saying at least 16 people had been killed that way as of November 5.

Amnesty International said it had found the military-grade canisters were Serbian- and Iranian-made.

Rights groups have also raised the alarm over the arrest and intimidation of activists and medics, who have reported being followed by unidentified security forces.

This week's violence has raised to around 130 the death toll since the protests resumed on October 24 after a lull.

A first wave of rallies from October 1 to 6 had killed 157 people, according to an official probe, most of them protesters shot dead in Baghdad.

Public anger erupted last month over widespread corruption and lack of jobs, then escalated into calls for the entire ruling system to be up-ended.

Oil-rich Iraq is OPEC's second biggest producer, but one in five people live in poverty and youth unemployment stands at 25 percent, according to the World Bank.

It is ranked the 12th most corrupt country in the world, according to Transparency International.

Prime Minister Adel Abdel Mahdi came to power in October 2018 pledging to tackle unemployment and graft, but he now faces the rage of protesters across the country who accuse him of overseeing the bloody crackdown.

"Abdel Mahdi's position means more to him than the blood of Iraqis," said a tribal dignitary who was protesting in Baghdad on Friday.

Abdel Mahdi's position looked precarious at the start of the popular protests, as the two sponsors of his government seemed to agree on his ouster.

But as the protest movement has dragged on, top leaders meeting in Baghdad, Najaf and Arbil appear to have reached a consensus over the premier seeing his term through.

Moqtada Sadr, the populist cleric who had been the most vocal about the government's ouster, has gone silent amid reports he is in neighbouring Iran.

In an apparent projection of normalcy, state television aired a recorded address by Abdel Mahdi to cabinet ministers on Thursday in which he discussed the 2020 budget.

He has proposed a series of reforms to appease protesters, including hiring new public servants, raising welfare and launching infrastructure projects.

On Friday, the country's top Shiite cleric Grand Ayatollah Ali Sistani said there should be "no more procrastination."

"The political forces in power have a unique opportunity to respond to citizens' demands with an agreed roadmap," he said in a sermon read out by his representative.