Geagea Says Officials Seem to be Living 'on Another Planet' 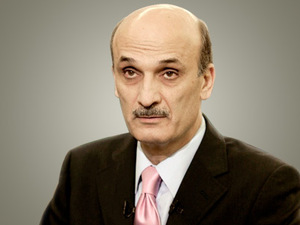 Lebanese Forces chief Samir Geagea on Friday said that the country’s political leaders seem to be living “on another planet,” lamenting that there are no indications that the new government will be formed anytime soon.

Geagea also accused Hizbullah of seeking a government similar to the resigned one by insisting on having its ally Free Patriotic Movement chief Jebran Bassil in it.

The World Bank's regional director on Friday urged Lebanon to form a new Cabinet "within a week" to prevent further degradation and loss of confidence in its economy.

Prime Minister Saad Hariri resigned his government on Oct. 29 in response to the unprecedented protests which have swept Lebanon starting in the middle of last month. The protests erupted over proposed new taxes and have snowballed into calls for the entire political elite that has ruled Lebanon since the end of its 1975-90 civil war to step aside.

More than a week after Hariri resigned, President Michel Aoun has not yet set a date for consultations with heads of parliamentary blocs who would name a new premier. There appears to be sharp divisions over whether the new Cabinet should be made up of experts only or include politicians.

I do admire Ja3ja3 for being outspoken especially when he talks about Lebanons #1 enemy. That said I do have to call him on that he was a part of the various previous governments and they too seemed to be from another planet. Suddenly he realized that he is from earth?