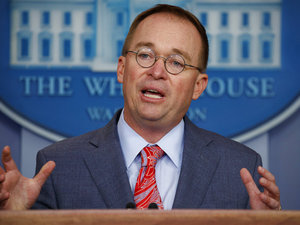 As Trump again blasted the probe as "corrupt" and a "witch hunt," Mulvaney rejected a subpoena from the House Intelligence Committee to appear for a closed-door interview.

The brush-off came days ahead of Democrats taking their impeachment investigation public with what promises to be highly contentious open hearings in Congress starting next Wednesday.

The investigation has gathered evidence that Mulvaney was a key player in Trump's alleged extortion of Ukraine to further his personal political goals.

Mulvaney, who is also acting head of the White House budget office, allegedly froze the money on Trump's order one week before a now-infamous phone call with the president's Ukrainian counterpart Volodymyr Zelensky.

A summary of the July 25 conversation released by the White House showed Trump asking for investigations into Biden and into a groundless conspiracy theory that Ukraine helped the Democrats in the 2016 election.

Democrats say Trump abused his office and engaged in bribery and extortion in making those demands of Zelensky.

"This is a scam by the Democrats who want to win an election," he told reporters on Friday.

"I would love for Mick to go up, frankly," he said of Mulvaney. "Except one thing: it validates a corrupt investigation."

An avalanche of testimony from government officials has corroborated the allegations against Trump.

Democrats plan to invite back some of the dozen officials who have given evidence in private for the open impeachment hearings to begin at the House Intelligence Committee next week.

Those hearings could lead to formal charges, or articles of impeachment, being leveled against Trump by the House Judiciary Committee as early as late December.

Impeachment inquiry leader Adam Schiff has warned that the White House's refusal to cooperate will be taken as evidence of guilt and also the basis for a charge of obstructing the investigation.