Lula's Lover Tweets 'Wait for Me' after Brazil Court Ruling 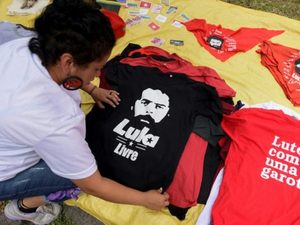 Eager to be reunited with her jailed lover, the girlfriend of Brazilian ex-president Luiz Inacio Lula da Silva tweeted "I'm coming for you, wait for me," shortly after a Supreme Court ruling that could free him.

Rosangela da Silva, a 52-year-old sociologist from Sao Paulo nicknamed "Janja," reportedly began dating Lula before he was incarcerated at the federal police headquarters in Curitiba in April 2018.

He is serving a nearly nine-year sentence for corruption and money laundering.

Rosangela da Silva was a weekly visitor at the facility, though Lula reportedly complained that the couple -- friends since the 1990s -- were not given conjugal rights.

Lula, whose wife of more than 40 years died in February 2017, has spoken several times in recent months of his love for "Janja" and his plan to marry her after he is released.

For his 74th birthday last month, she tweeted a photo of the leftist leader, adding: "Today I only want you in my arms to give you endless affection! Congratulations, my love! I love you forever."

Dozens of Lula's supporters gathered Friday outside the jail where he is being held. Da Silva was not seen among them, AFP reporters said.

Lula is one of several thousand prisoners who could be freed after the Supreme Court late Thursday overturned a rule that required convicted criminals to go to jail after losing their first appeal.

They would remain free until they had exhausted all legal appeals.

Lula's lawyers have filed an application for his immediate release, which could happen as early as Friday.