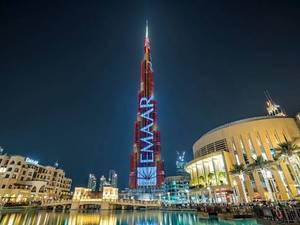 Dubai construction and hospitality giant Emaar Properties on Sunday reported a rise in interim profit results, posting higher sales despite an economic downturn that has depressed the property industry.

The company, which owns the world's tallest tower, Burj Khalifa, said it posted $362 million in net profit in the third quarter, up 20 percent from $302.4 million in the same period last year.

Dubai is defined by its beachfront skyscrapers and man-made islands, but it is stuck in a five-year property downturn with analysts saying there will be no relief in the near term.

The government in 2018 introduced a raft of rescue measures including easy visa terms for expatriate buyers and permanent residency permits for big investors. And in September, a top-level committee was established to rebalance the market.

Emaar, the largest property firm in the Middle East, reported that over the first nine months of the year net profits rose just 2.3 percent to $1.2 billion, from $1.18 billion in the corresponding period of 2018.

The growth was attributed to the "resilient performance of the property, malls and hospitality business," the company said in a statement posted on the Dubai Financial Market website.

Since 2002, Emaar has delivered some 59,000 residential units in Dubai and other global markets.

Besides real estate, Emaar has a number of malls, including Dubai Mall, the world's most visited shopping center, and several hotels.