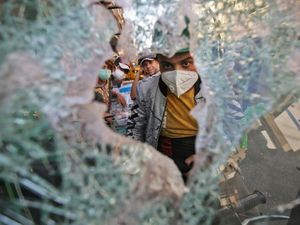 Iraqi protesters shut down state institutions Tuesday as the United Nations stepped up pressure on the government to enact a raft of reforms in response to anti-government rallies.

Backed by the country's top Shiite authority, the U.N.'s phased plan demands an immediate end to violence that has killed more than 300 people since protests erupted in October.

It comes just days after Iraq's influential neighbor to the east Iran brokered an agreement among Iraq's main political forces to close ranks around the government.

As night fell on Tuesday in Baghdad, security forces fired live rounds, tear gas canisters and stun grenades from behind concrete barriers to disperse demonstrators near their main gathering place in Tahrir Square.

An AFP reporter and a security source said some two dozen people were wounded in the skirmishes, which have persisted in recent weeks as demonstrators resist efforts to snuff out their movement.

They were bolstered by a meeting Monday between the UN's top Iraq official Jeanine Hennis-Plasschaert and senior Shiite cleric Grand Ayatollah Ali Sistani.

"We're optimistic about the UN and I respect her visit to Sistani," said one demonstrator, Ali Kadhem, 33, at the main protest site of Tahrir Square.

"Let them intervene more in Iraq. We want them here. Our people were starved, killed. We've been through everything."

Across the country's south, demonstrators shut down schools, government buildings and even state media offices.

In Amarah, crowds closed the local branch of Iraqi state television, accusing it of unfairly covering the demonstrations.

Schools closed in the towns of Hillah and Kut, where hundreds hit the streets, as well as in the protest hotspots of Nasiriyah and Diwaniyah.

Young people make up 60 percent of Iraq's population of nearly 40 million, and youth unemployment stands at 25 percent, according to the World Bank.

The lack of employment is a key driving force behind the popular anger.

Demonstrators accuse the government, by far the country's biggest employer, of handing out jobs based on bribes or nepotism instead of merit.

Since the protests started in early October, they have swiftly escalated into demands for a sweeping overhaul of the entire system.

But political parties appear to have rallied around the government of embattled Prime Minister Adel Abdel Mahdi.

Soleimani, who often appears in Baghdad at times of political crisis, brokered a deal to keep the ruling system intact, with Abdel Mahdi at its head.

But the UN has also upped its mediation with Iraqi actors, and Hennis-Plasschaert has proposed a phased roadmap -- starting with an immediate halt to the use of force.

It also calls for electoral reforms and anti-graft measures in the next two weeks, followed by constitutional amendments and major legislation on infrastructure within three months.

Sistani met with Hennis-Plasschaert on Monday and welcomed the plan, a vital endorsement in a country where the Shiite religious authority holds tremendous sway.

But he said he feared authorities were not "serious" about enacting the required reforms.

Sistani, who never appears in public, has described the protesters' demands as "legitimate" in his weekly Friday sermons, delivered through a representative.

His office has also denied being party to any agreement brokered by Soleimani to keep the government in place.

Iraqi authorities have faced widespread international criticism for the mounting death toll from protest-related violence, which has exceeded 300 in six weeks.

At least 18 protesters have died since Saturday, medical sources have told AFP.

Rights defenders have complained that the government has stopped providing updated casualty figures and has severely restricted access to the internet.

Volunteer medics and activists, meanwhile, have spoken of a campaign of kidnappings, killings and intimidation they say is aimed at scaring them into stopping their work.

The Iraqi parliament's human rights committee met Tuesday to discuss a report for submission to the legislature the following day.

Hennis-Plasschaert is also due to attend the session, scheduled for Wednesday afternoon.