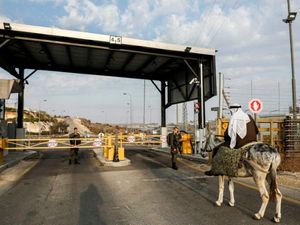 The EU's top court ruled Tuesday that food products from occupied Palestinian territories must be labelled as such, drawing an angry response from Israel which slammed a "double standard."

The European Court of Justice said that under EU rules on food labeling, it must be clear where products are from -- particularly if they come from Israeli settlements.

The ECJ ruling effectively backs the EU guidelines issued in 2015 on labeling goods from Israeli-occupied areas, which also prompted a furious response. At the time, Prime Minister Benjamin Netanyahu compared them to the Nazi boycott of Jewish businesses.

The Luxembourg-based court ruled after France's top tribunal asked for clarification of rules on labeling goods from the West Bank, including annexed east Jerusalem, which the international community considers occupied Palestinian land, as well as the Golan Heights, which Israel took from Syria in 1967.

"Foodstuffs originating in the territories occupied by the State of Israel must bear the indication of their territory of origin, accompanied, where those foodstuffs come from an Israeli settlement within that territory, by the indication of that provenance," said an ECJ statement announcing its decision.

This was challenged by the Organisation Juive Europeene (European Jewish Organisation) and Psagot, a company that runs vineyards in occupied territories.

"The ruling's entire objective is to single out and apply a double standard against Israel," it said.

"There are over 200 ongoing territorial disputes across the world, yet the (European Court of Justice) has not rendered a single ruling related to the labeling of products originating from these territories."

But a spokeswoman for the European Commission, the EU's executive arm, insisted the ruling "does not concern products from Israel itself". It would not affect the privileged trading status the Jewish state has under its association agreement with the bloc, she added.

"The EU does not support any form of boycott or sanctions against Israel and the EU rejects attempts by the campaigns of the so-called Boycott, Divestment, Sanctions (BDS) movement to isolate Israel," spokeswoman Mina Andreeva said.

Elsewhere, the secretary general of the Palestine Liberation Organisation, Saeb Erekat, welcomed the ruling but urged the EU to go further.

"Our demand is not only for the correct labeling reflecting the certificate of origin of products coming from illegal colonial settlements, but for the banning of those products from international markets."

The court said that labeling products as from the "State of Israel" when in fact they come from "territories... occupied by that State" could mislead consumers.

The court added that EU regulations on labeling the origin of goods were intended to allow consumers to make "informed choices" -- not just on health, economic, environmental and social grounds, "but also to ethical considerations and considerations relating to the observance of international law".

"Such considerations could influence consumers' purchasing decisions," the ECJ said.

On the issue of Israeli settlements, the court said "they give concrete expression to a policy of population transfer conducted by that State outside its territory, in violation of the rules of general international humanitarian law".

Consumers might be misled if it was not made clear that products originated in these settlements, the court added.

But Francois-Henri Briard, the lawyer for Psagot, condemned the ruling, saying it catered to "political prejudices".

"If such labeling is applied to Israeli products, surely it will also need to be applied to scores of other countries around the world who could be argued to be in violation of international law," he said in a statement.

He said it would strengthen the BDS movement, which calls for a broad-ranging boycott of Israel over its treatment of the Palestinians.