Fear and Sorrow in Gaza and Israel after Another Escalation 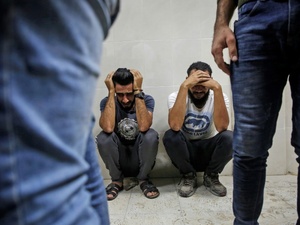 Sirens wailed, residents ran to bomb shelters and both sides feared yet another war as an Israeli targeted strike killing an Islamic Jihad commander in the Gaza Strip on Tuesday sparked exchanges of fire.

The escalation sent shock waves through the coastal strip and into the heartland of Israel.

The dawn raid killed Islamic Jihad commander Baha Abu Al-Ata and his wife, triggering waves of rocket fire into Israel which sent residents rushing for cover across the south and center of the country.

Israel blamed Ata for previous rocket fire and other attacks against it, calling him a "ticking bomb" who was planning more violence.

Israel launched air raids after the retaliatory rockets, targeting what it said were Islamic Jihad militant sites and rocket-launching squads.

In the Mediterranean city of Tel Aviv and other locations, the Israeli army ordered anyone not in "essential" occupations -- such as hospital staff -- to stay home.

Some who arrived before getting the message found their office doors locked.

Kindergartens, schools and universities in parts of the country were closed, forcing what Israeli media said were about a million pupils and students to miss classes.

Schools were also closed throughout the Gaza Strip, where Palestinians feared yet another full-blown conflict -- which would be a fourth since 2008.

Just south of Tel Aviv, a rocket fell on the seaside town of Rishon Lezion, crashing onto a street close to an upscale residential district.

A 62-year-old local resident who gave her name only as Ruty was philosophical, pitying those who live next to the Gaza border.

"The poor people in the south," she said. "They live this every day so we can't complain when it comes to us sometimes."

Further south, near the port of Ashdod, a rocket slammed into a busy highway, narrowly missing several speeding vehicles and exploding in an orange ball and a cloud of smoke, video from traffic cameras showed.

In the town of Sderot, within sight of the Gaza Strip and a constant target for cross-border fire, a rocket hit a factory, setting it ablaze although there were no reported casualties there.

"We woke up and saw the news regarding the assassination (of Al-Ata) and we celebrated," said local resident Netanel, 24, who did not give his surname.

"The Islamic Jihad people wake up in the morning with the goal of destroying, killing and causing losses."

Gaza's health ministry reported a total of five people killed and 30 wounded in the Palestinian enclave.

Israeli medics said they had treated 39 people for a range of injuries.

Gaza resident Amin Dalloul, 31, called the latest spiral of violence a ploy by Israeli Prime Minister Benjamin Netanyahu, who could be indicted for corruption in the coming weeks.

"The (Israeli) occupation wants a new war on Gaza to save Netanyahu and hence the Zionist decision to return to the assassinations," he said.

Abeer Hassan, 37, was worried at the prospect of a full-blown Israeli offensive.