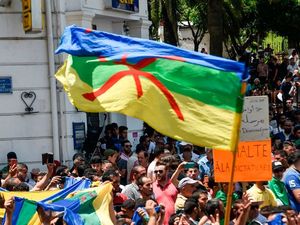 A court in the capital's Sidi Mhamed district sentenced 22 of the accused to 12 months in prison -- half of it suspended -- and fines of 30,000 dinars ($275), the CNLD committee said on its Facebook page.

Said Salhi, vice president of the Algerian human rights group LADDH, condemned the ruling as "heavy, hard and unexpected", adding that the defense team made up of almost 70 lawyers would appeal.

Protesters had gathered outside the court on Monday ahead of the late night ruling, chanting: "Free the detainees!"

Later on Tuesday, the same court sentenced six others to six months in jail on the same charge over the Berber -- or Amazigh -- flag.

Salhi told AFP that the convictions "threaten the unity of the Algerian judicial system" after several demonstrators put on trial in the provinces on the same charge had been acquitted.

Algeria has been rocked by months of street protests demanding an overhaul of the entire political system.

Army chief General Ahmed Gaid Salah, the country's main powerbroker since the April resignation of longtime president Abdelaziz Bouteflika, has banned protesters from bearing flags other than the Algerian one.

He was apparently referring to the Berber flag, which demonstrators have been seen holding alongside the national ensign.

Authorities arrested a group of 42 protesters on June 21 for brandishing the Berber ensign during rallies in Algiers.

The trial of the 20 remaining defendants, including one currently in hospital, has been postponed to November 18, the CNLD committee said.

Algeria is home to some 10 million Berbers, most living in Kabylie, a mountainous region to the east of Algiers that has long suffered marginalization.

In April 2001, the death of a high school student at a police station there sparked riots and a crackdown in which more than 120 were killed and hundreds wounded.

Kabylie had been preparing to celebrate the 21st anniversary of its fight to secure recognition of its Berber identity.

In 2002 the Berber language Amazigh was recognized as an official language alongside Arabic.

Berbers are descended from the pre-Arab inhabitants of north Africa and still have a presence across the region, particularly in Algeria and Morocco.