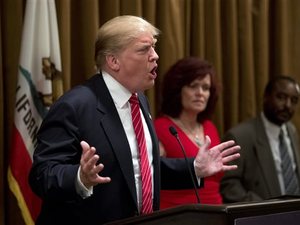 The U.S.-China trade war threatens almost 1.5 million jobs across the United States that depend on the movement of goods through ports in southern California, according to a report released Tuesday.

Higher import costs and lost markets also pose a risk to $186 billion in annual merchandise trade through the ports and will burden consumers with billions of dollars in price increases, according to the study published by the Port of Los Angeles, which is heavily reliant on China trade.

Timed to coincide with an address on trade by President Donald Trump on Tuesday, the report's main findings flatly contradict the White House's message in recent months that the United States is easily weathering Trump's multi-front trade conflict.

U.S. industrial lobbies have raised the volume of their complaints this year as the trade war has dragged on while farms and factories fall on hard times.

"Some regions and industries are already feeling the pain and the damage to jobs, income and tax revenue could be crippling down the road," Gene Seroka, executive director of the Port of Los Angeles, said in a statement.

But economists warn the trade war has begun to rattle the global economy, which is already suffering a general slowdown.

Trump announced last month a partial deal with Beijing but any agreement has yet to be signed.

The International Monetary Fund said last month the trade wars are likely to shave 0.8 percent off global growth next year and was eating into business investment in the United States.

The nation's largest container port complex, including the ports of Los Angeles and Long Beach, handles $380 billion in two-way cargo, with China accounting for 54 percent of imports and 29 percent of exports, according to the study.

The most vulnerable agricultural states include Republican strongholds like Kansas, Texas and Louisiana as well as electoral battlegrounds such as Ohio and Arizona, according to the report.

The United States and China have so far slapped tariffs on almost a half-trillion dollars in two-way trade.

Trump last month held off on a round of China tariff increases and White House officials have suggested in recent days that as part of the current deal he could also delay new tariffs planned for mid-December.

Those duties would raise costs for highly popular consumer electronics including Apple's iPhones.