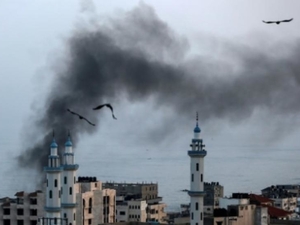 Two Palestinians were killed in Israeli air and missile strikes on Gaza early Wednesday, the territory's health ministry said, taking the death toll from a two-day flare-up to 12.

Islamic Jihad said one of the two men killed on Wednesday was a member, identifying him as Khaled Fawwaj.

The Israeli military said it carried out a series of strikes on Islamic Jihad targets on Wednesday in response to new rocket fire from Gaza.

It said one of the targets was a rocket launching squad which it hit.

Air raid sirens sounded in the Israeli towns of Ashkelon and Netivot near the Gaza border.

Since Israel's targeted killing of Islamic Jihad commander Baha Abu al-Ata on Tuesday morning, at least 220 rockets have been fired at Israel from Gaza without causing any deaths, the military said.

Israeli air defences intercepted 90 percent of the rockets, it added.