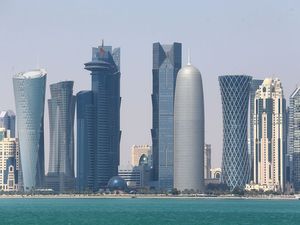 Saudi Arabia, the United Arab Emirates and Bahrain have said they will participate in this month's Arabian Gulf Cup football tournament in Qatar, signalling a thaw in their bitter two-year feud.

The three Gulf states as well as Egypt cut relations with Qatar in June 2017, accusing it of bankrolling Islamist extremist groups and of being too close to regional rival Iran. Doha denied the accusations.

In a U-turn, the Saudi Arabian Football Federation said on Twitter on Tuesday that it had accepted the invitation to take part in the tournament, due to be held between November 24 and December 6.

In separate but near verbatim statements, the football federations of the UAE and Bahrain also announced that they will participate.

The announcements signal a possible easing of the bitter rift between Doha and the Riyadh-led group, which had imposed bans on shipping, trade, direct flights, overflights and land crossings with Qatar.

The Saudi-led group had so far defied pressure from Washington to lift its blockade on Qatar, which hosts a huge US air base.

Qatar also shrugged off the Saudi-led group's demands to end the crisis, including shutting Doha-based broadcaster Al-Jazeera, closing a Turkish military base in the emirate and downgrading Qatari diplomatic ties with Iran.

But fears of a wider regional conflict as Washington steps up economic pressure on Iran seem to have prompted the Saudi-led group to de-escalate tensions.

Washington and its allies have blamed Iran for recent attacks on key Saudi oil installations as well as a string of assaults on oil tankers in the Gulf. Tehran denies the accusations.