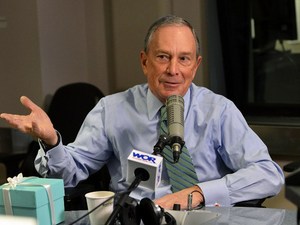 Michael Bloomberg's likely run for the presidency would create a hornet's nest of practical and ethical problems for his company, which as one of the world's biggest news organizations would be thrust into coverage of its owner.

A campaign could set up unusual challenges for the privately owned firm Bloomberg LP and its Bloomberg News division, which employs some 2,400 journalists, including 1,000 in Washington, and includes online and television media operations.

While the news group managed Bloomberg's tenure as New York mayor from 2002 to 2013 without any major incident, a presidential run, successful or not, would require a strict firewall, say media analysts.

Could the news organization fairly cover the candidate? Would it have privileged access if Michael Bloomberg wins the White House? Would Bloomberg journalists be afraid to write anything casting him in a negative light?

"It's a no-win situation" for journalists, said a former Bloomberg political reporter who asked to remain anonymous.

"Bloomberg News covering president Bloomberg -- all that work would be studied with an extra fine-tooth comb by everybody looking for potential bias one way or the other."

Kate Andersen Brower, who covered the White House for Bloomberg during the Obama administration, said it can be "a delicate balance reporting the news fairly and objectively when covering your boss."

"It's certainly possible but it's undoubtedly fraught," she said.

Dan Kennedy, a journalism professor at Northeastern University, agreed, saying: "That's a terrible predicament (for journalists) and Bloomberg the person ought to make sure his journalists are not in that position. If he emerges as a serious candidate he should divest himself of the whole thing."

Kathleen Culver, chair of the Center for Journalism Ethics at the University of Wisconsin, said Bloomberg and his organization would need to address any real or perceived conflicts of interest.

"I would hope they have very specific guardrails to deal with real conflicts of interests," Culver said.

"But they also need to be very forthright to explain what they are doing to address the perceived conflicts" with public disclosure about the measures.

Kelly McBride, the ethics chair at the Poynter Institute, a journalism research and teaching center, said the Bloomberg organization is likely weighing steps needed to address any concerns.

"Bloomberg is a well-respected, high-level journalism organization, and I would expect it may be harder on him --  to counter the perception they are giving him a pass," she said.

A Bloomberg run could also feed into President Donald Trump's narrative that mainstream news outlets are biased, as part of his efforts to undermine media credibility.

"You could easily picture the president saying (Bloomberg) has his own propaganda outlet," Culver said.

"But I don't think that should be the guiding principle ... Media outlets should not run scared from those kinds of threats."

Jeff Jarvis, a City University of New York journalism professor, said he believes any conflicts would be manageable based on his experience during Bloomberg's tenure as mayor.

"He navigated it well and Bloomberg navigated it well," Jarvis said. "What matters is transparency, and intellectual honesty, that becomes key. You've got to be able to report things that aren't comfortable."

The potential for conflicts of interest for Bloomberg come amid criticism of Trump for failing to disclose his finances and hotel operations in various parts of the world which have numerous business and political guests.

Other media outlets have faced challenges in covering their owners, including the Washington Post, owned by Jeff Bezos, and the Wall Street Journal, controlled by Rupert Murdoch and his family.

The New York-based financial information company said in a statement it had no specific comment, given that Bloomberg was not a candidate.

"If and when he does (become a candidate), we will share our coverage plans with the newsroom," a spokesman said.

In an interview last year, Bloomberg himself appeared to be aware of the potential for conflict of interest if he were a candidate.

"We've always had a policy of we don't cover ourselves," he told Radio Iowa.

"You can't be independent and nobody's going to believe that you're independent. And quite honestly I don't want the reporters I'm paying to write a bad story about me."

The billionaire said one option if he were a candidate would be to stop covering politics or create blind trust for his assets. He also said he would consider selling the company entirely.

"You have to do it at some point," he said of selling the company. "You're going to die anyway so you want to do it before then."