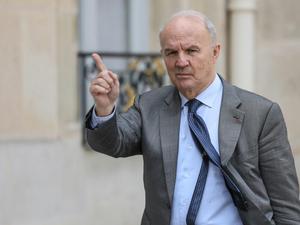 The French army general charged with the rebuilding of Paris' fire-ravaged Notre-Dame was rebuked by the government Thursday after telling the chief architect to "shut his mouth" in a sign of tension over the cathedral's future appearance.

General Jean-Louis Georgelin lost his cool with architect Philippe Villeneuve in a dispute over whether to replace the spire -- which was toppled in the April 15 blaze -- with an exact replica or mix things up with a modern twist.

"As for the chief architect, I have already explained that he should shut his mouth," Georgelin said to gasps of astonishment at a meeting of the cultural affairs committee of the lower house National Assembly late Wednesday.

"Respect is a cardinal value in our society. As public officials, we must be exemplary," he said.

President Emmanuel Macron -- who appointed Georgelin to head the massive reconstruction project -- has said he is in favor of adding a "contemporary" touch to the spire.

But Villeneuve insists it must be redone exactly as it was before.

Georgelin, a former army chief of staff, suggested that "we move ahead in wisdom so that we can serenely make the best choice for Notre-Dame, for Paris, for the world".

He said the final option will be decided in 2021, and called in the meantime for the "hustle and bustle" over the issue to stop.

Georgelin confirmed the five-year timeframe set by Macron for rebuilding the cathedral -- a deadline some experts see as too ambitious.

Villeneuve, however, has said the target could only be met if the spire is rebuilt to resemble its former self.

Notre-Dame, part of a UNESCO world heritage site on the banks of the River Seine in Paris, lost its gothic spire, roof and many precious artifacts in the  blaze.

Paris prosecutors said in June a poorly stubbed-out cigarette or an electrical fault could have started the fire and opened an investigation into criminal negligence.

Last month, the culture ministry said nearly one billion euros ($1.1 billion) had been pledged or raised for the gargantuan reconstruction.

The cathedral is still enveloped in scaffolding and plastic sheeting.

"The phase of securing the edifice is not over. It will be done when the scaffolding around the spire has been dismantled," he said, and warned of winter gales threatening to "destabilize" the temporary, protective structure.

On the positive side, Notre-Dame "no longer seems to be emitting lead"  -- a major concern shortly after the disaster that saw hundreds of tonnes of lead in the roof and steeple melt.

Villeneuve, the cathedral's architect since 2013, last month said: "Either I restore it identically, it will be me, or they make a contemporary spire and it will be someone else."