Lebanese Businessman to Give Hitler Hat to Israeli Foundation 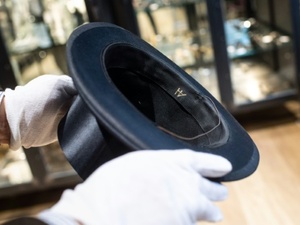 A Lebanese businessman will donate Adolf Hitler's top hat and other objects linked to the Nazi leader  to an Israeli foundation in order to keep the items out of the hands of neo-fascists.

Abdallah Chatila, who has made a fortune from diamonds and real estate in Geneva, told the Matin Dimanche weekly that he had "wished to buy these objects so that they could not be used for the purpose of neo-Nazi propaganda.

"My stance is totally apolitical and neutral," he added.

The collapsible top hat believed to have belonged to Nazi leader Adolph Hitler sold for 50,000 euros ($55,300) at a controversial Munich-based auction on Wednesday.

Chatila scooped up as many other Hitler-related articles as he could at the auction and has donated them to the Keren Hayesod association, an Israeli fundraising group.

The head of the European Jewish Association, rabbi Menachem Margolin, said he was "bowled over" by the gestures from the businessman.

"In a cynical world, a real act of kindness, of generosity and solidarity," he said in a statement Sunday.

Margolin added that Chatila had accepted an invitation to join a visit by 100 European parliamentarians to the site of the World War II Auschwitz death camp in January to receive an award.

Wednesday's auction in Munich was organised by Hermann Historica, which has picked up business in Nazi memorabilia that the main houses have largely avoided.

Other items that went under the hammer on Wednesday included a silver-plated copy of Hitler's anti-Semitic political manifesto Mein Kampf that once belonged to senior Nazi Hermann Goering. It was sold for 130,000 euros.

Ahead of the auction, Rabbi Margolin recalled that "it is Germany that leads Europe in the sheer volume of reported anti-Semitic incidents", urging the German authorities to compel auction houses to divulge the names of those buying such articles and put them on a watch list.

Many of the items belonging to top Nazi leaders were seized by US soldiers in the final days of World War II.

"Far-right and anti-Semitic populism is advancing throughout Europe and the world," Margolin told the weekly paper.

Born in Beirut in 1974 into a family of Christian jewellers, Chatila is among Switzerland's 300 richest people.

He suggested that the items of Nazi memorabilia "should be burned", while "historians think they should be kept as part of the collective memory".