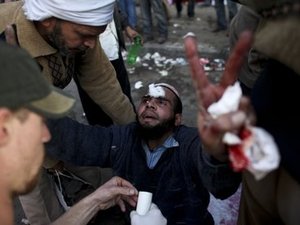 "I offer all my apologies for what happened yesterday and there will be an inquiry," Shafiq told state television as the fighting on Tahrir Square raged for a second day with at least seven people dead.

Shafiq, who became premier after Mubarak sacked the government in a bid to quell the protests, said earlier that the deadly unrest would be investigated, amid allegations that plain clothes police were involved.

Shafiq later told journalists that he was unsure whether the attacks had been organized.

"I don't know if it was organized or spontaneous," he said during a televised news conference.

"There were clashes. And clashes between youths are always more heated. It seems they were carrying some weapons."

"Egyptian hearts are bleeding," he said. "It was a bloody night, with much damage."