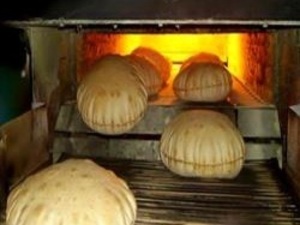 Caretaker Economy Minister Mansour Bteish on Monday reiterated his rejection of any increase in the price of bread amid the economic and financial crises in the country.

During the meeting, bakery owners demanded “hiking the price or slashing the weight” of the standard pack of Lebanese pita bread.

Bteish rejected the demand and briefed the delegation on an agreement he reached with mill owners under which they would sell wheat to bakeries for the price of LBP 565,000 per ton.

The minister also cited a study conducted by the Directorate General of Grain and Sugar Beet and international sides.

Weeks ago, the central bank said it would facilitate access to dollars for importers of petroleum products, wheat and medicine.

The Lebanese pound has been pegged to the greenback at around 1,500 for two decades and the currencies are used interchangeably in daily life.

But amid a deepening economic crisis, banks have gradually been reducing access to dollars in recent months, forcing importers to resort to money changers offering a higher exchange rate and sparking price hikes.

On the open market, the dollar has been selling for more than 2,000 pounds.

Its funny how suddenly they all have religion about their work. They did not care about price hiking a few months back now they all want el 7aqiqa...

...and this should not be news, it is part of his daily job that he is being handsomely paid for. This should barely be a paragraph in his weekly report!