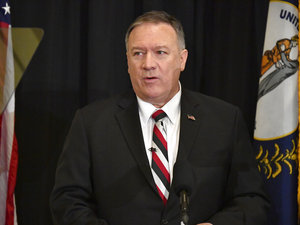 U.S. Secretary of State Mike Pompeo said Monday that Iran was the uniting factor behind protests around the Middle East, saying demonstrators in Iraq, Lebanon and Iran itself opposed the clerical regime.

While acknowledging diverse local reasons for the unrest that has swept the Middle East as well as other regions, Pompeo pointed the finger at Iran, considered an arch-enemy by President Donald Trump's administration.

Iraqi premier Adel Abdel Mahdi resigned "because the people were demanding freedom and the security forces had killed dozens and dozens of people. That's due in large part to Iranian influence," Pompeo said.

"The same is true in Lebanon, the protests in Beirut," he said at the University of Louisville.

"They want Hizbullah and Iran out of their country, out of their system as a violent and a repressive force," he said.

He said that protests inside Iran -- which Amnesty International says have killed more than 200 people -- showed that Iranians were also "fed up."

"They see a theocracy that is stealing money, the ayatollahs stealing tens and tens of millions of dollars," he said.

In both Iraq and Lebanon, protesters have primarily called for an end to corruption, greater efforts to create jobs and a restructuring of the political system.

In Lebanon, the United States has been seeking to isolate Iran-backed Hizbullah, which is an armed movement but also a political party with berths in the previous government.

The Trump administration, which has close ties with Iran's adversaries Saudi Arabia and Israel, has put a priority on curbing Tehran's regional influence including by imposing sweeping sanctions.

Mucha do about nothing....The whole world knows about Irans Mephistopheles program in the ME but will they do about it? Call them baddies?

Dick go play in the streets again, no one can understand you and when we do we wish we didn't waste our time doing so.

Just leave us the f alone. You don't care about Lebanon, all you care about is defeating Iran. Go to war with them and leave us out of this.