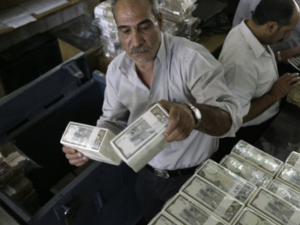 The value of the Syrian pound on the black market sank to 1,000 to the dollar at some money changers Tuesday, marking a new record low for the nosediving currency.

The drop comes amid a spiralling liquidity crunch in neighbouring Lebanon, which has long served as a conduit for foreign currency entering the heavily sanctioned government-held areas of Syria.

One currency exchange office in the Syrian capital Damascus told AFP he was selling dollars on the black market for 1,000 pounds for the first time on Tuesday.

A specialised website put the volatile rate at 975 pounds to the dollar  --  more than double the official rate of 434 Syrian pounds posted by the central bank on its website.

In the Old City of Damascus, a trader who preferred not to give his name said everything from food to transport had become more expensive in recent weeks.

"Prices have doubled in the past two months," the trader said.

"Everybody prices their items according to the new dollar exchange rate" on the black market, he explained.

Syria analyst Samuel Ramani said the pound had fallen by 30 percent since anti-government protests erupted in Lebanon on October 17.

An economic downturn has accelerated since the protests started, and a liquidity crunch has become more acute in a country that has long served as an economic and financial lifeline for dollar-starved Syrian businesses.

As Western sanctions tightened on Syria during the war, many in the country have opened businesses in neighbouring Lebanon, stashed their money in its banks and used the country as a conduit for imports.

But Lebanese banks started introducing controls on dollar withdrawals over the summer, straining the supply of the greenback to Syrian markets.

Syrian pound is going down the drain faster than a gallon of Draino but our Kizb friends here will tell us its a simple price to pay considering how it accumulate in the defeat of the Yids!