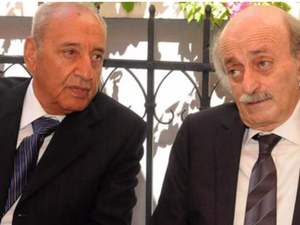 “The binding parliamentary consultations must be held in line with regulations. Everything happening now is unconstitutional,” said Jumblat from Ain el-Tineh where he met with Speaker Nabih Berri.

Asked whether he supports Samir Khatib, a nominee for the premiership post to succeed outgoing PM Saad Hariri, he said: “I am not the one who nominates Samir Khatib or any other. This is unconstitutional.”

According to the constitution, the President of the Republic designates the Prime Minister in consultation with the Speaker based on binding parliamentary consultations, the content of which he shall formally disclose to the latter.

Hariri's outgoing cabinet remains in a caretaker capacity as leaders haggle over the next government make-up.

Hariri resigned on October 29 bowing to the people’s demands. Demonstrations demanding an overhaul of Lebanon's entire political system have rocked the small Mediterranean country since mid-October,

President Michel Aoun, whose powers include initiating parliamentary consultations to appoint a cabinet, has yet to schedule such talks.

On his ties with Berri, Jumblat said: “It has been a while since my last visit to Berri because of the developments in the country, and I don't want anyone to misinterpret this. I visited Berri to affirm our historic relations and friendship.”

Jumblat concluded by saying he is scheduled to meet Hariri later today.

Business as usual they are supporting each other while undermining the other camp....That has traditional been the modem operand....