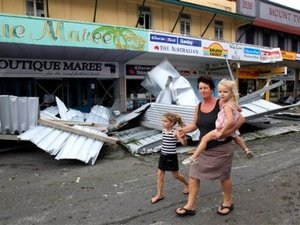 Australia's biggest cyclone in a century shattered entire towns, pummeling the coast and churning across the country Thursday, terrifying locals but causing no confirmed fatalities.

Shaken residents emerged to check the damage after Severe Tropical Cyclone Yasi hit land at around midnight, packing winds of up to 290 kilometers per hour in a region still reeling from record floods.

Officials and locals said 90 percent of the main street in the small Queensland town of Tully, south of Cairns, had "extensive damage", while the coastal community of Cardwell also suffered "significant devastation".

Australia's deputy prime minister Wayne Swan said the damage was worse than he had expected. "It's a war zone," he said.

No deaths or serious injuries were reported, although police said severed mobile phone networks were hampering efforts to check on two men who may be missing in the Cardwell area, and a third man was reported missing in Port Hinchinbrook.

Officials said good planning, strong public warnings and the fact that the storm veered suddenly southwards, away from Cairns, home to 122,000 people, saved the region from the catastrophic losses that had been feared.

But Bligh warned that a full picture was yet to emerge from a group of the worst-hit towns, where communications and road access remained difficult.

"It's a long way to go before I say we've dodged any bullets," she said.

Near the storm's "ground zero", families had cowered as roofs were ripped from homes, and some 10,500 people huddled in evacuation centers as the storm raged with a roar like a jet engine.

"We were sitting at the kitchen table, we heard a ripping and off came the roof," said Scott Torrens, 37, who hid his three children beneath mattresses in the family living room.

In Cardwell, aerial pictures showed house after house with its roof shorn off, a shattered church also had its roof blown away, and the town was covered in mud left by surging ocean waters.

At nearby Port Hinchinbrook, dozens of luxury yachts swept from their berths were piled on each other like discarded toys, while the marina lay empty.

"There's so much damage it's just incredible," Tully cane farmer Vince Silvestro told AAP news agency. "When I woke up it looked like what it would have looked like in World War II or something if the city had been bombed."

Power blackouts darkened 177,000 homes across the region, including the city of Townsville, as emergency workers battled into the worst-hit towns, hampered by roads cut by floods and falling trees.

Despite the devastation, three babies were born during the tempest, including a little girl who was brought into the world in an evacuation center. The baby's mother ruled out naming her "Yasi".

Swiss mining giant Xstrata evacuated its Mount Isa and Cloncurry mines as the storm headed further inland, after being downgraded to category one. But the coal ports of Hay Point and Dalrymple Bay reopened, as well as sugar harbor Mackay.

About 75 percent of Australia's banana supply was estimated to have been affected, while damage to sugarcane crops was put at roughly Aus$500 million.

The storm's size and power dwarfed Cyclone Tracy, which hit the northern Australian city of Darwin in 1974, killing 71 people and flattening more than 90 percent of its houses.

It was also twice the size and far stronger than the category four Cyclone Larry that caused Aus$1.5 billion ($1.5 billion) of damage after hitting agricultural areas around Innisfail, just south of Cairns, in 2006.

The maximum-category five storm, reportedly large enough to cover most of the United States and with winds stronger than Hurricane Katrina, followed widespread flooding that left much of Queensland under water.

But Professor John Merson, head of the Institute of Environmental Studies at the University of New South Wales, warned more such disasters were likely as climate change warms up waters and fuels extreme weather.

There is a "complete lack of attention being given to the fact that we have a category five cyclone because we have climate change, yet we completely ignore this factor in the whole thing", he said.